The avalanche was recorded 45 kilometres west of Terrace.

For many Prince Rupert residents it was a case of cold sandwiches and perhaps some cold soup over the lunch hour as power was interrupted for about forty five minutes on Thursday.

From the West side, through the Downtown area an onto the West side of the city and beyond to Port Edward, the hum of electronic devices was silenced as BC Hydro suffered a transmission circuit failure shortly after 12:15 PM.

The effect for the most part to bring much of the retail services in the community to a standstill as computer systems and credit and debit card transactions shut out during the outage.

As the black out rolled through the noon hour, BC Hydro's list of trouble areas grew quickly, with
a number of the outage areas archived as part of their restored services files. 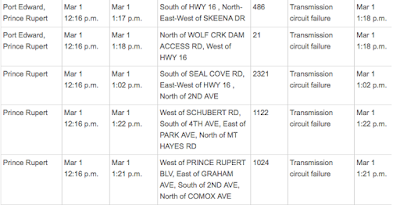 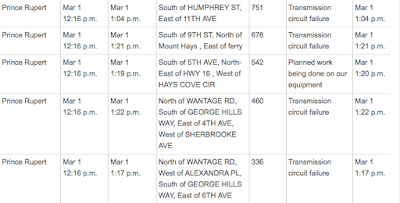 Power was restored to much of the city by 1 PM. Other than the notes on transmission circuit issues, BC Hydro has not added to their information page on the BC Hydro website.

For a look at other notes related to BC Hydro service in the Northwest see our archive page here.


To return to the most recent blog posting of the day, click here.
Posted by . at 1:42 PM