The Prince Rupert Port Authority has hailed the start of a much anticipated remediation project for the city's Seal Cove area, with an ambitious plan of development about to get underway for the Seal Cove Salt Marsh Project.

In a statement today the Port noted oftThe Seal Cove Salt Marsh’s value as fish habitat has been highly impacted by historical human activity and industrial development, including the clearing of natural vegetation, disturbed intertidal habitat, and collection of waste and refuse.
This habitat enhancement project will revitalize a freshwater creek, marine riparian areas, intertidal marshes and mudflats, eelgrass beds and other shoreline plantings, and enhance connectivity to Fern Passage and Seal Cove under the existing trestle bridge for marine life.
The project is moving forward through a collaborative partnership with the City of Prince Rupert, the project will also incorporate new recreational waterfront access that will enable local residents to enjoy the community’s newest jewel.
Among some of he features to come, the installation of a lighted pathway around the salt marsh, a pedestrian bridge, viewpoints and seating areas, and interpretive signage will greatly enhance the shoreline experience. In addition, the park’s proximity to Rushbrook Trail and Seal Cove seaplane base will make for what the Port describes as a truly unique Prince Rupert landmark. 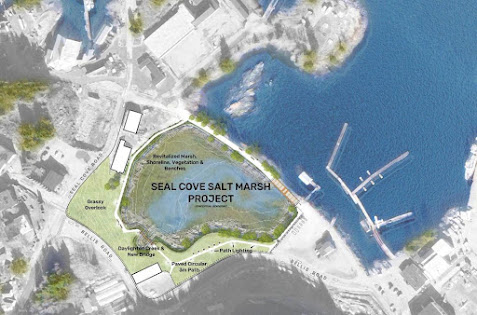 The $4 million project is being undertaken by Coast Tsimshian Northern Contractors Alliance. Construction is scheduled to be completed by July 2021 for public access and will take three to five years for the habitat enhancements to fully establish themselves.
Progress will be monitored by PRPA on an ongoing basis through that time.
Shaun Stevenson the President and CEO of the Prince Rupert Port Authority observed as to how the new project will add to some of the other recreation themes that the Port has invested into in the city
“This is an exciting opportunity for us to incorporate habitat compensation, environmental sustainability, and create a new public space for the community. The Prince Rupert Port Authority has invested in several waterfront access projects, including the Rushhrook Trail, Atlin Promenade, Cow Bay Marina, Atlin & Northland Terminals, and the Seal Cove Salt Marsh project adds another opportunity for waterfront access in our community.”
Prince Rupert Mayor Lee Brain took advantage of today's announcement to note how the initiative fits into the Prince Rupert 2030 vision plan for the city.
"This sustainable, new development will enhance the lives of both people and wildlife, as well as upholds the Prince Rupert 2030 Vision for our community. We are pleased to be collaborating with the Prince Rupert Port Authority on a project that will improve waterfront access and turn an underutilized section of our city into a recreational destination.”
The Mayor was quick to share word on his social media feed today to celebrate the Port's announcement.

The project site has been provided by the City of Prince Rupert, and development will be fully funded and managed by PRPA.
The Seal Cove project was first put up on the community's radar in 2019,  its evolution is compensation for marine habitat impact associated with the Fairview-Ridley Connector Corridor.
The port noted that this is just one of many habitat restoration projects PRPA has undertaken as part of a robust program that offsets environmental impacts of new port project development.
For more notes on past Port initiatives see our archive page here.
Posted by . at 2:48 PM