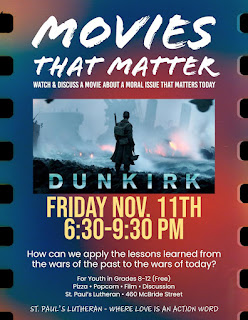 As part of their ongoing "Movies that Matter" film series for teens in the community, St. Paul's Lutheran Church is hosting a showing of the 2017 feature film Dunkirk

The Christopher Nolan epic that tells the story of the massive evacuation of Allied Forces from 1940 France in World War II will wrap up their recent focus on the impact of war.

The monthly movies which are directed towards students in Grades 8-12 offer a chance for the students to discuss the issues of the world today, framed through a historical view.

The feature this month falls on Remembrance Day Friday and the discussion will focus on how war impacts on the lives of everyone in Society.

The first movie of the series Hacksaw Ridge was about conscientious objection during war (viewed in September) and the second movie Shake Hand with the Devil was about the genocide in Rwanda (viewed in October).

This month’s feature of Dunkirk will be viewed on Remembrance Day and focuses on how war impacts the lives of everyone in a society.
Movies that Matter takes place is every 2nd Friday of the month from 6:30-9:30 PM at St. Paul’s Lutheran at the corner of Fifth Avenue West and McBride.
As part of the night,  the teens make pizza, have popcorn, watch the film, and end with a discussion on the moral matters related to the film.
All youth are invited and there is no charge to attend.
For more information on the Movies that Matter series contact St. Paul's through their website.
Posted by . at 9:22 AM