This time next week, North Coast residents and a range of visitors to the city will be making their plans for Seafest weekend, the three day festival that launches summer for the region.

This years theme for the weekend is "Celebrating Prince Rupert Marine Rescue", which will make for much of the artwork on floats for this years Seafest Parade.

The Saturday showcase event which starts around the Court House at 11 AM and works its way along 2nd Avenue West turning at 7th Street and then returning down 3rd Avenue.

Sporting events appear to launch this years festival with a number of sports events including slo-pitch, soccer and 3 on 3 Basketball all scheduled to start up on Friday and carry on through the weekend.

Other sporting events planned for the weekend include 4 on 4 Street Hockey Challenge, Volleyball, Mini Putt and Rugby 10's.

Friday also features the Seniors Tea at the Highliner Plaza Hotel and an evening of music at Mariner's Park from 8 PM to 11 AM.


The busiest of the days of the three day festival is Saturday, besides the annual Parade, a number of downtown events, food booths and entertainment make up part of the Saturday line up along Third Avenue which will be closed to traffic for the day, the Bandstand at City Hall is the focus for much of the daytime entertainment during the day and hosts the reviewing stand for the parade.

Saturday evening a number of entertainment options are there for the choosing, with Beer Gardens and two shows to choose from a Tina Turner Dinner Show at the North Coast Meeting and Convention Centre and Abba the Tribute Band performing at the Lester Centre.

Or Seafest goers can stop in at the Wheelhouse off of Cow Bay for an evening of live music at the brewery.

Sunday is waterfront day with all of the Seafest events shifting to the Rotary Waterfront park location, where the traditional favourites of the Quick and Daring and Sail past and Flyover, Canoe Tug of Wars and Swim For Survivial will play out through the afternoon.

Music is set for the Kwinitsa Bandstand while there will be Wagon Rides, Kayak Rides for Kids and a number of other activities taking place around the waterfront area.

As well, for those interested in taking tours of visiting Navy and Coast Guard vessels, they will be available to the public at the Seal Cove Coast Guard Base on Saturday from 1 until 4 and again on Sunday from 10 until 2 PM. 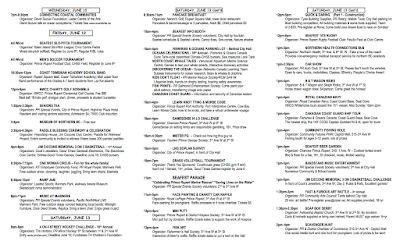 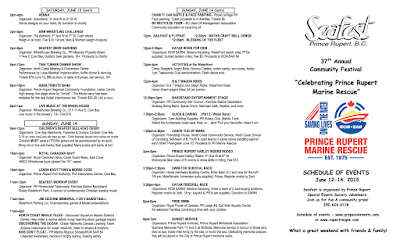 You can learn more about the scheduled events and how to get involved with them, or catch up to any late developing themes for the weekend from a number of social media platforms.