Province looks to help BC communities with airport infrastructure issues

The Province of British Columbia rolled out a new financial program on Monday, designed to provide funding for required infrastructure issues at the provinces airports.

The Program called the British Columbia Air Access Program is designed to support the connection of communities across the province and build British Columbia's aviation sector's long term potential.

The BCAAP guidelines note that the program will assist airports with funding towards capital infrastructure that meet  a number of key conditions.

Projects that are approved for funding will be able to invoice eligible incurred costs from the time an annual call for applications occurs. The province provides its contribution at the completion of the project, or with more complex projects, through milestone payments that will be phased in. 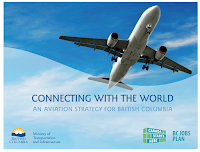 You can review some background on the  new BCAAP initiative here, it is part of a larger overview of Aviation by the Government called "Connecting With the World: An Aviation Strategy for British Columbia.

More on that blue print for the future on aviation in BC can be found here.

The deadline for submissions related to the BCAAP funding availability is June 22nd. Some of the projects that are eligible for the funding are such items as runway enhancements; lighting; navigation systems, runway extensions; and apron and taxiway improvements.

Many of  those items have been part of the list of past and recent work that has taken place at the Digby Island airport, where that leaves Prince Rupert when it comes to the new funding initiative makes for an interesting situation.

It could be that for this new funding program, the prospect of accessing any funding is limited owing to the project timeline already in place, an unfortunate bit of timing considering that the bulk of the work would have fit nicely into the program guidelines.

As noted over the last few years the Prince Rupert Airport Authority, through Prince Rupert City Council borrowed seven million dollars for much needed airport work, some background on the borrowing process and the launch of the renovation project can be reviewed below.

If the funding window for the current renovation project is closed owing to the application process, the potential to access further funding for future projects will no doubt catch the eye of City officials.

In recent months the challenges in place facing the Airport and its Transportation system between Prince Rupert and the airport have made for a fair bit of discussion.

The scale of the those concerns might fit under the Major projects section of the Air Access Program guidelines, providing the opportunity for Prince Rupert to find a way to at least access some of the new funding for airports that the province is making available.

More items related to Transportation in the Northwest can be found from our archive page.
Posted by . at 8:17 AM

Email ThisBlogThis!Share to TwitterShare to FacebookShare to Pinterest
Labels: BC Airport Funding program