East side power outage lasts one hour as winds pick up

BC Hydro hasn't provided much in the way of detail regarding a power outage on the east side of Prince Rupert this afternoon, the various descriptions for the different outage points on their map, listing the cause as "other".

Still, as the winds of the day might have had something to do with a one hour and fifteen minute power interruption, with the power going out at 2:20, just as the winds picked up significantly through the afternoon.

From about the Cow Bay area and on towards the east made up the bulk of the affected area, while the power remained on from McBride and 2nd and west, including the downtown portion of the city.

By 3:35 power had returned to the majority of the east side, with only one pocket in the Seal Cove Circle area still listed as under investigation.

Some of the updates from the BC Hydro notice can be viewed below: 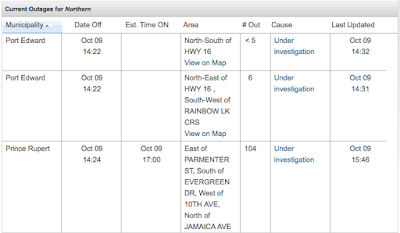