Here come the candidates; and their household mailers as well!

Smithers was the host of the start of the home stretch for the 2015 Federal election campaign, with four of the five candidates for the Skeena-Bulkley Valley seat in the House of Commons offering their policies and opinions to residents of the Northwest interior city.

The trip to Smithers the latest stop in the candidates tour of the riding which as we noted earlier this week will take them to Terrace, Haida Gwaii and Prince Rupert over the course of the next seven days.

Unlike a municipal election where the issues are centred on one jurisdiction and the candidates are readily accessible, the federal campaign in the case of Skeena-Bulkley Valley takes on one of the most challenging geographic areas in the nation, meaning that North Coast residents may not see their candidates more than a few times before they head off to the polling booth.

While some of the candidates have made some use of social media options, for the most part the current of the election campaign seems to be one of a more national than local nature, with most of the information to this point noting the main points of the federal parties and their leaders.

With but eighteen more days left until election day, the candidates are preparing their talking points for the final push of the campaign and some are now starting to back up their words with some reading material, with Tyler Nesbitt providing the first of the ever popular election time household mailer.

Mr. Nesbitt's offering is a familiar theme, one that stresses many of the positioning statements of the national party including a focus on the economy, families, taxes , Seniors and Safety and Crime.

When it comes to the local aspect of his home delivery message, the candidate notes his background in the Northwest and the prospect of industrial growth that the region could soon realize, asking residents if they are going to seize the opportunity or squander it.

Among some of the items he hopes to address should he be successful on October 19th are lowering taxes, build strong, collaborative relationships with First Nations communities, develop resources in a responsible manner, protecting the rights of victims of crime.

An overview of his mailer arriving in area mailboxes this week can be found below (click on the images to expand the information). 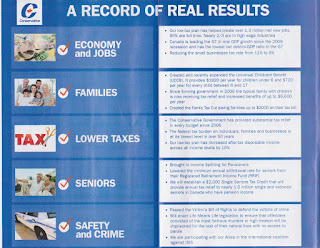 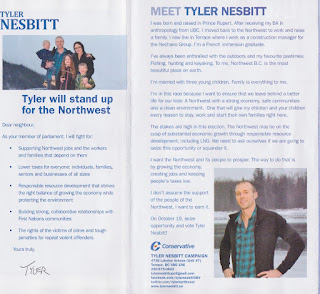 As the other candidates deliver their household information sheets to the North Coast we'll take some notes and offer up their work as well for the consideration of the voters.

Candidate debates to come across the Northwest take place as follows:

For more background on the most recent developments in the 2015 election campaign see our Election Archive page here.
Posted by . at 8:26 AM

Email ThisBlogThis!Share to TwitterShare to FacebookShare to Pinterest
Labels: Household Mailers begin to arrive in Election 2015