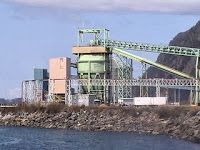 Ridley Terminals it would seem is home to all sorts of intrigue as remove our way into these early days of 2016, with some upper management changes and diversification plans seemingly all part of the mix.

As we outlined earlier today, Nathan Cullen, the MP for Skeena-Bulkley Valley is calling on the Auditor General to investigate the appointment of a former Conservative official to the position of Vice President for Corporate Affairs at RTI.

Some further background to that development can be found here and here  culled from the ipolitics.ca website.

An interesting side story however has been revealed from that story, offering up a glimpse into what could be the plans for the local coal terminal as it looks address the current state of the coal industry, with Mr. Cullen's interest in the hiring policies indicating that a diversification plan is apparently in the works for Ridley in the near future.

The concept of moving goods other than coal through Ridley appears to have received its push with word that long time President George Dorsey's contract was not renewed by the RTI Board, as that body seeks to move forward with a diversification plan.

Mr. Dorsey had taken over as President and CEO of Ridley Terminals in May of 2008, as part of a major shakeup of the company at the time.

While an interim President is in place,  the search it would seem is on for someone to take the duties on full time, the position is currently listed as Vacant on the Government of Canada website, which provides background on RTI governance and operation.

The top post at RRI would pay somewhere between $124,00 and $146,700 for the successful candidate who will best be able to help the Board in achieving its new vision for the industrial terminal on the North Coast.

As for the diversification plans, no details as to what the Board may have in mind when it comes to alternative goods to be shipped through the facility have been publicly outlined as of yet, which leads to no shortage of speculation on what may soon transit through the Northwest gateway port.

Mr. Cullen has raised a flag of concern for some, by offering up the suggestion that one of the proposals that Ridley may be considering includes the potential use of the terminal to ship oil by rail, something which would clearly make for another key discussion topic for those on both sides of industrial development issues on the North Coast.

How that concept would work with the new Federal Liberal government's apparent commitments towards environmental matters, including a planned moratorium on the shipment of crude oil on the North Coast is just one of any number of questions that could come to mind when it comes to the shipment of oil from the Northwest.

Whatever diversification plan may be in mind for the RTI Board, no clear indication has been outlined in any official form, with little in the way of new information posted to the Ridley Terminals website in recent months.

You can find more information related to items of note about the North Coast industrial terminal from our Ridley Terminals archive page here.
Posted by . at 8:42 AM

Email ThisBlogThis!Share to TwitterShare to FacebookShare to Pinterest
Labels: RTI changes at the top and plans for diversification