A shift in the airline landscape in Canada may provide a benefit for Terrace based Hawkair, as residents of the Northwest seek a way to get to Kelowna to take advantage of a new Canadian airline NewLeaf and its rock bottom price structure for flights across Canada.

Last month, Hawkair suspended its service to Prince Rupert, revising its route map to offer flights between Terrace and Kelowna, a destination that the airline believes will be a rewarding one and offers direct access for Northwest residents to the Okanagan valley.

Hawkair's current service to Kelowna is through Prince George, with departure out of Terrace at 2:45 PM and arrival in Kelowna at 6 PM, which might limit the options for those looking to connect to the east.

Still if travel schedules prove workable, with a new airline flying cross Canada out of Kelowna, residents of the Northwest might be inclined to take advantage of the new fares, some as low as 89 dollars as well as the destinations offered.

Making for a new transportation option that could drive even more traffic through the Terrace airport in 2016.

The Winnipeg based NewLeaf starts operations as of February 12th, offering service to six other cities besides Kelowna, also served by the new airline will be Abbotsford, Halifax, Hamilton, Regina, Saskatoon and Winnipeg.

Service out of Kelowna will offer flights to Saskatoon, Regina, Winnipeg and Hamilton with a further connection out of Hamilton to Halifax. Flights operated by NewLeaf will be provided by Kelowna based Flair Airlines

A look at the winter schedule for NewLeaf can be found here. 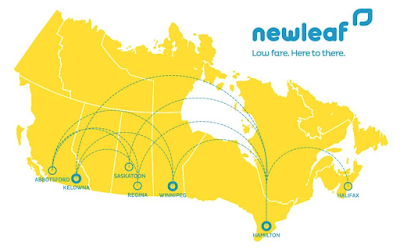 You can learn more about the start up of the airline here.

The airline has also set up a a Facebook page and twitter feed for those looking to cash in on air travel bargains.

Reservation information for New Leaf can be accessed here.

Some notes on the launch of the new airline can be found below:

More on Transportation in the Northwest can be found on our archive page here.
Posted by . at 9:42 AM

Email ThisBlogThis!Share to TwitterShare to FacebookShare to Pinterest
Labels: NewLeaf airlines to fly out of Kelowna