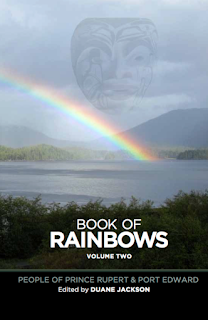 The tales and accounts of those that have made Prince Rupert their home have gone to a second edition and are now available online, as the Hecate Strait civic biography project known as  Book of Rainbows delivers a new collection for our review..

Following on the success of the First edition in 2013, edition number two continues the theme of exploring some of the lives of some of those that were born in the city or have made Prince Rupert their home.

Some familiar names mark the index for edition number two, which brings us the stories of fifty North Coast residents, covering a range of occupations and contributions to the community.

Highly acclaimed basketball coach Mel Bishop is profiled in the latest version of the project, providing a fascinating glimpse into his travels both as a member and long time coach of the Rainmaker basketball program, as well as to his university days.

First Nations residents receive a prominent role in this edition, with a number of residents from the surrounding communities  such as Sam and Marilyn Bryant, Alexander Fred Campbell and Frances Jackson to name a few featured, highlighting their active roles in the North Coast some on the political side of things, others focused on culture and traditional ways.

The accounts of a number of local educators make for some interesting reading, offering some background into both those that have been long time North Coast residents, as well as those that relocated to the region to chart their new lives.

Gurvinder Randhawa's story makes for an interesting review, tracing his life in India and then through his time in Prince Rupert, an ongoing evolution that has taken him now to a seat at Prince Rupert City Council.

The stories of Doug and Debbie Davis offer up a look into how the North Coast has become a major part of their lives and how they have become a fixture on the city's waterfront.

Popular local chef Adrienne Johnston is profiled as well, her biography offering some insight into her time on the North Coast and the community connections that she has made over the years.

Those are just a few of the names to be found on the 247 pages of the second edition. There are many, many more stories to explore from the collection, which makes for a handy reference guide for the community, highlighting as it does many of those that have made their mark in the community.

Some background on the project can be found here.

You can review the online version of Edition two here.

Catching up on the first edition is also quite easy, one click here takes you back in time.

The Book of Rainbows has been available in print form from some of the usual locations in town, you can also contact Hecate Strait to find out more about the project and if copies are still available.
Posted by . at 9:44 AM

Email ThisBlogThis!Share to TwitterShare to FacebookShare to Pinterest
Labels: Second book of Rainbows