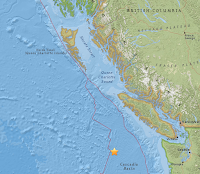 The seismic plates shifted a little bit off shore of Tofino this afternoon as the USGS recorded a 3.4 magnitude earthquake located  263 kilometres southwest of the Vancouver island community at 3:06 this afternoon.

The temblor which had a recorded depth of 10 kilometres, was far enough off the coast that no noticeable effects were felt on the West coast of Vancouver island.

Ironically, the small sized quake struck mere hours after a Tsunami warning had been issued in error for the entire coast of British Columbia.

The notice which was delivered at 1:50 Friday afternoon, provided for a brief flurry of excitement for British Columbia media outlets before the official explanation was provided by Emergency Management British Columbia.

The false alarm was generated as routine maintenance was being conducted on the organization's electronic delivery system.

Tsunami warning for B. C. sent in error
False alarm: Tsunami alert sent out in error for B. C. coast, Vancouver Island

You can review past seismic events along the British Columbia coast from our archive page here.
Posted by . at 4:54 PM