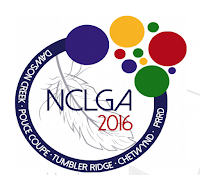 It's convention season for British Columbia politicians, with Dawson Creek the destination for this weeks North Central Local Government Association meetings which started yesterday and continues through to Saturday.

The annual gathering provides an opportunity for municipal and regional government officials and staff members to exchange ideas, vote on a range of resolutions, take in a number of information sessions and explore the newest items to be found at the trade show.

The City of Prince Rupert has sent a delegation to the four day event in the Peace River region, led by Mayor Lee Brain who took to his Civic Facebook page on Wednesday along with Councillor Wade Niesh as they toured a nearby Wind Farm Development in Dawson Creek, part of a day long Energy Tour put on by convention organizers. 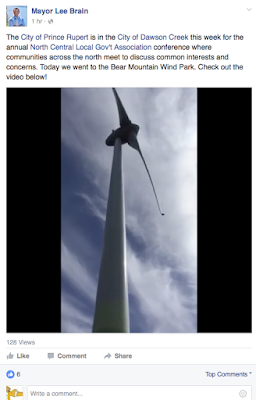 Mayor Brain included a video of their tour of the wind farm to his Facebook entry noting the City's 2030 Sustainable city committee planning and perhaps setting the stage for a further discussion in Prince Rupert about the prospects of wind energy in the community in the years to come.

There was no roll call listed on the Mayor's Facebook portal when it comes to Prince Rupert participation, so residents will have to wait for the return of the travelling party to learn which other Council members or city staffers were along for the annual gathering.

As for the work ahead at the convention, the Opening ceremonies and Opening address launches the heart of the convention today, with a number of speakers and information sessions to follow through the day and again on Friday.

A look at the full itinerary can be found here.

The Port of Prince Rupert is involved with one of the convention information sessions, as Ken Veldman from the Port takes part in the Future of Agriculture Panel Session on Friday morning.

As with any convention there will be a range of resolutions for delegates to consider and vote on during discussion sessions, the majority of them provided by the member municipalities of the NCLGA.

A quick scan of the resolution listings indicates that Prince Rupert has provided for no resolutions to consider at this years convention, with the only item from the North Coast on the notice paper coming from the District of Port Edward

The District's resolution is related to CN Railway crossings, with the District seeking the approval of the group to direct the NCLGA and UBCM request the federal government to provide funding opportunities that will allow communities to upgrade the crossing to meet their new, required standards.

Other Northwest communities with resolutions to be considered include:

Support for the Northwest BC Resources Benefits Alliance

As part of the convention proceedings, the NCLGA has already announced the appointments for 2016-17 Regional representation, with Port Edward Mayor Dave MacDonald named as the Skeena-Queen Charlotte representative for the year ahead.

One even that has been cancelled was an opportunity for convention delegates to take a fly in tour of the Alberta Oil Sands in the Fort McMurray area, the cancellation the result of the horrific wildfire situation in that community that has resulted in devastation for many of that city's neighbourhoods.

Following the Mayor's travels in the Peace Country through his social media platform may offer up some background as to the work this week for the Prince Rupert delegation, with the first opportunity for a more wide ranging report from the participants coming up at the next City Council session on May 9th.

Some media notes on convention week can be found below, updates to come as the convention continues through to Saturday.

Email ThisBlogThis!Share to TwitterShare to FacebookShare to Pinterest
Labels: CIty of Prince Rupert at NCLGA in Dawson Creek