North Coast travellers now have one more option starting today when it comes to scheduling a trip away from Prince Rupert, or to bring family here for a visit, with a summer addition now in place for the Air Canada schedule.

Just in time for the long weekend and the start of the busy summer travel season, Air Canada takes to the runway with a third flight to Prince Rupert.

The third connection between Vancouver and Prince Rupert comes by way of Air Canada flight 8230 set to depart Vancouver at 1 PM today, with an anticipated arrival at the YPR Terminal at 2:59 PM.

Those departing Prince Rupert this afternoon will take off after the roughly twenty minute turn around with an arrival in Vancouver scheduled for 5:15 PM. 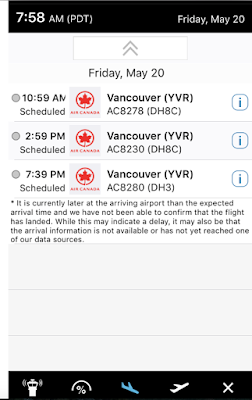 The additional flight now offers travellers a late afternoon option for the travel planning and fills the void for the city created when Hawkair first suspended and then cancelled its service to Prince Rupert.

The additional landing and departure comes as the Prince Rupert Airport continues on with its renovation plans, those that may have recently passed through YPR have noted the new departure lounge and automated luggage carousel that has recently been introduced.


The City recently announced that the ground transportation aspect of travel to and from the airport has seen an upgrade as well, with First Canada having recently introduced a new passenger bus to the system, set to replace the old school bus version that made for much in the way of conversation over the years.

More items of interest on Air Transportation in the Northwest can be found on our archive page.
Posted by . at 10:10 AM