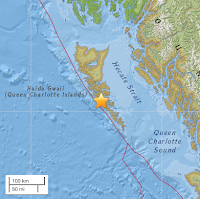 No damage was reported and No tsunami warning generated from a Sunday evening earthquake on Haida Gwaii, originally recorded as a 4.6 magnitude quake striking just before 7 PM, it was downgraded to a 4.2 by the USGS.

The quake had a recorded depth of 10 km.

The seismic event is the second shift on the fault lines of the weekend, a smaller quake of 3.4 mg was recorded late Friday afternoon Southwest of Tofino.

Emergency Info BC provided further background on the temblor during the course of Sunday evening.

For more items related to seismic events along the Pacific coast see our archive page here.