With Enbridge Energy officials recently indicating their desire to seek a three year extension from the National Energy Board when it comes to the Northern Gateway pipeline project, those that are against the proposed development have taken their concerns to the Prime Minister.

In a letter dated May 19th and addressed to Prime Minister Justin Trudeau, the group notes how any extension of the Enbridge Northern Gateway certificate is inconsistent with the direction given to Cabinet Ministers Garneau and Tootoo.

Enbrigde is asking the NEB to extend the expiry date on its federal certificate by three years, taking that approval until the end of 2019. In that period of time they will apparently be looking to address some of the mistakes that they admit they have made in the past and move their plan forward to get their project back on track.

The coalition is urging the Federal Cabinet to reject any extension of Northern Gateway's certificate and that the Federal government intervene in the matter by making a submission to the NEB to confirm that it is the Cabinet that has the final say over NEB direction to extend the certificate.

The North Coast's Des Nobels representing the Friends of Wild Salmon, outlined the approach that the coalition is taking with the Prime Minister, noting Mr. Trudeau's commitment to a ban on tankers on the North Coast and calling on the PM to live up to that commitment.

"We're hard-pressed to know how to reconcile Prime Minister Trudeau's earlier commitment to a tanker ban with allowing Enbridge three more years on its permit,"  "We're hopeful Trudeau will recognize the conflict here and follow through with his tanker ban."

UFAWU's Joy Thorkelson also is a signatory to the letter to the Prime Minister, as are local environmental advocates Luanne Roth and Charles Justice.

In total, fourteen groups from across Northern BC and beyond have signed the document that has been forwarded to the Prime Minister and his Cabinet. 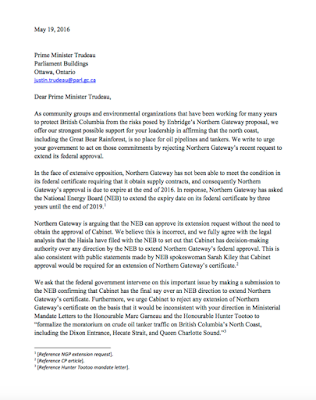 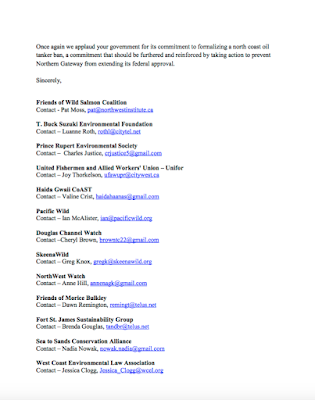 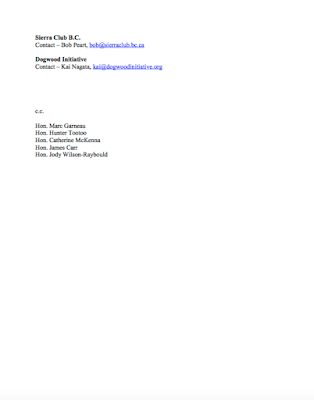 In April, Alberta Premier Rachel Notley made note that that there had been some discussion related to the proposed pipeline, observing that the terminal for the pipeline could be shifted from a Kitimat terminus, to one on the North Coast near Prince Rupert.

That is something which has raised a number of alarm bells for those in the region that expressed concerns on the pipeline project during public hearings a number of years ago.

Enbridge Northern Gateway has provided updates to its website highlighting a number of changes in the project, including an increased partnership between industry and First Nations in both Alberta an British Columbia