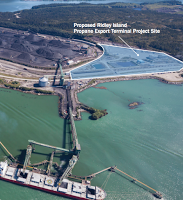 Media attention to the pace of economic development on the North Coast has increased in recent weeks, thanks in part to the efforts of Alberta based AltaGas which has made some significant progress in its plans to ship propane out of the North Coast.

As we noted on the blog on Tuesday, the Canadian energy company announced some background of a shipment agreement with Astomos, a major Japanese energy firm, with Asian buyer set to receive at least fifty percent of all of AltaGas's proposed annual shipment levels for liquid propane out of a proposed terminal location on Ridley Island.

The Memorandum of Agreement which would see some 1.2 million tonnes of propane shipped out of Prince Rupert and marks a giant step in the plans of AtlaGas to diversify their export market plans and should provide confirmation for local residents of the progress to come for the development project at Ridley.

The project which is still in its early stages of the environmental assessment process and awaitin a Final Investment Decision would, if approved, send its first shipment out of the proposed Terminal in 2018.

This week's announcement has been of some interest to the National media over the last few days, featuring a number of items related to the agreement between AltaGas and Astomos.

On Wednesday, the Business News Network took an interest in the story, featuring some background on the agreement, the state of the propane industry and the proposed development in Prince Rupert, featuring the North Coast plans as part of an extensive interview with Alta Gas CEO David Harris on the cable business channel.

You can review the full interview with AltaGas chairman below:


More items of interest related to the proposed development for Ridley Island can be found on our archive page here.
Posted by . at 9:34 AM