While the City held the line on any additional tax increases for 2016, the annual tax bill is still apparently providing some financial surprises for residents of Prince Rupert.

As the tax bills arrived in mailboxes around the city on Tuesday, some residents took to social media to report in, some claiming that they are facing increases in their property tax bill from last years numbers, while others noted that they were paying the same, or in some cases a little less.

Here at the Global headquarters of the North Coast Review, 2016 will provide for a small decrease from last years tax burden. Something to bring a smile to the accounting department, but yet still only offering up enough in spare change for stop over at Starbucks, or maybe a couple of double-doubles at Tim Horton's.

While you check out your mailbox to see how your home has fared in the city's annual collecting of the cash, a few other notes from the mailing to take note of.

Mayor Lee Brain provided the annual letter to residents that comes with the tax bill, noting the achievements made by the City and City Council through 2015 and into early 2016.

Among some of the highlights that the Mayor wants us to take note of:

Projected growth is bringing jobs and new families to the community, with the City looking to maximize social, economic and environmental benefits.

The creation of new land use rules for development in the community ranging from residential to industrial as well as supports for affordable housing and open spaces.

The letter reminds residents of the Hays 2.0 vision initiative, described as a bold and forwarding thinking plan that offers up the theme of a more resilient future.

The completion of the new Cow Bay Marina gets a shout out, as do plans to revitalize the McKay Street Community park.  The Watson Island industrial site rates a short update, with the current dismantling of the structure made note of, though the current status, or an update related to the legal situation with Colonial Coal surrounding the industrial site is not included in the home mailing.

The committee work of Council gets a review, with Mayor Brain's letter noting the creation of the 2030 Sustainable City committee and the Small Business Committee over the last year.

And the City's work with Re:Build Rupert gets a short review, with the securing of 4.4 million dollars in funding towards the city's phase one work on the water supply among the highlights, the Mayor cautions however that in the coming years a portion of taxes collected will be dedicated towards asset renewal, to be used along with matching funds from other levels of government to deliver on major infrastructure projects.

You can review the full letter below. (click to expand) 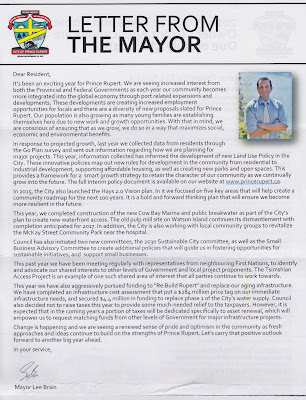 As well, the City provides a breakdown on spending through a pie chart display, which makes note of the share of the tax revenue that each department makes use of as part of their operations.

The largest portion of revenue collected by the city, 32% goes towards the operation of the City's RCMP detachment, with the Fire Department next at 16%, while Recreation takes 12% and Governance 11%. Roads, Grants and the Airport Ferry all account for 5% each, while a range of other services and municipal uses make up the remaining amount. 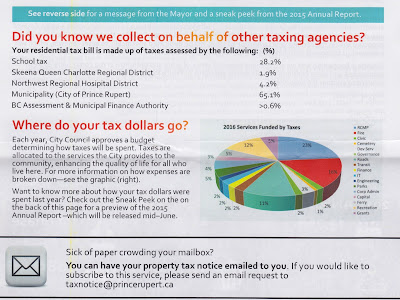 The City also notes in its mailing that it collects on behalf of a number of other taxing agencies in the region, including the School District, Skeena-Queen Charlotte Regional District, Northwest Regional Hospital District and BC Assessment and Municipal Finance Authority.

The household mailer also provides a preview of the upcoming Annual Report, which will provide background on much of the City's operations. The pre-Report teaser campaign notes such things as the City's findings in population counting (numbers still at odds with the province), as well as the work completed on the Cow Bay Marina and Landfill expansion.

The sneak peek also notes that the City has issued 1,085 Business licences in 2015, though a walk into the downtown core and the range of empty store fronts still found there might leave one wondering where many of those businesses might have set up shop.

The Annual Report can be found here, once it is posted to the City's website.

Not mentioned, but something of perhaps similar interest for residents will be the Statement of Financial Information that will be released sometime in the next few months, that final accounting of the City's financial notes, provides details on such items as the salaries and expenses of Council members, the Mayor and those civic employees in the upper reaches of the civic payroll.

It also provides further information related to purchases of goods and services by the City of Prince Rupert in the last year, providing a snapshot into how the city is making use of the money collected from the annual property tax cash call.

The Due Date for payment without penalty or interest is July 4, 2016.

A look at the financial information provided by the City so far in 2016 and from years past can be found on the City's Financial Information page here.

You can review some of the discussion of Budget time related to taxes from our Budget archive page.