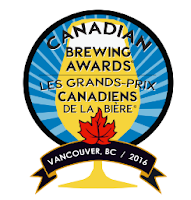 They travelled, they served and they conquered!

Representatives from Prince Rupert's Wheelhouse Brewery Company spent the weekend in Vancouver sharing the now not so secret broth of their Smokehouse Porter with the North Coast craft brewers taking on a growing level of competition in the Craft Beer industry and tempting the judges with one of the signature brews of the local brewery.

When the froth had settled at the Saturday night finale, the Rupert brewery that is tucked away in the city's Atlin Terminal area had claimed a Bronze medal for their efforts.

The Canadian Brewing Awards were handed out on Saturday night, with the North Coast representative collecting the Bronze Medal in the  overall there were 163 awards handed out during the celebrating of Craft Brewing held in Richmond.

The Bronze medal for Prince Rupert comes in the Smoked Beer competition, which saw Coal HarbourBrewing Co. claim the Gold with their Smoke and Mirrors Imperial Smoked Ale, while Waterloo, Ontario's Brick Brewing Co. collected the Silver for their Smoked Applewood Roggenbier.

You can learn a bit about the Smokehouse Porter here

The full list of award winners from all categories in the Saturday night competition is available here.

The Canadian Brewing Awards provided the launching point for a celebration of the brews at the Vancouver Craft Beer Week which continues through this week with Three Day Beer Festival from June 3 to 5 at the PNE.
North Coast residents of course have access to award winning beer right in their own hometown, you check out the Smokehouse Porter and other concoctions from the Wheelhouse at the Brewery just up the hill from the Atlin Terminal.


The gang at the Wheelhouse made use of their Facebook page  and twitter feed over the weekend to keep the folks back home up to speed on the event, celebrating their award with the local faithful on Saturday night.

More background on what the Canadian Brewing Awards is all about can be found here.

Some details on the Saturday night awards can be found below:

And if this Vancouver Province story gains a bit of traction, the growing legions of Craft Beer fans will be heading for the Prince Rupert brewery, perhaps with a salutation of "to our health!"

For more items related to Prince Rupert's commercial sector see our archive page here.
Posted by . at 8:38 AM