A key minister in the Liberal cabinet has stepped aside to take care of personal issues,  a shift in personnel at the Federal level which will leave some important items for the North Coast up in the air for the short term.

Hunter Tootoo, the Minister of Fisheries and the Coast Guard announced his departure from the federal scene with a statement late Tuesday afternoon, citing his desire to address addictions issues and asking for privacy at this time.

In addition to his Ministerial responsibilities, Mr. Hunter represented the Nunavut riding as the MP for that community in the House of Commons.

The news out of Ottawa quickly spread from the national capital as the evening moved forward, with Prime Minister Justin Trudeau issuing a statement early Tuesday evening Ottawa time confirming the news of Minister Tootoo's departure. 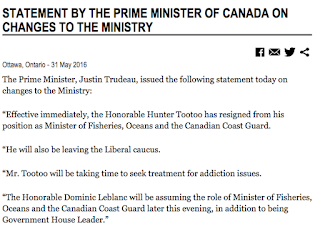 For the North Coast the timing of his departure will leave a number of important files still to be addressed, including issues related to the CEAA process for the proposed Pacific NorthWest LNG project, the Federal Governments plans for a Tanker Ban on the west coast, as well as some initiatives that have passed his way when it comes to concerns over the west coast salmon fishery.

You can review some of the items of note that have been forwarded to the Fisheries Minister from our archive pages below:

Some background on today's announcement can be found below:


More background on the Federal Political scene can be found on our Darcy McGee political portal.
Posted by . at 6:04 PM