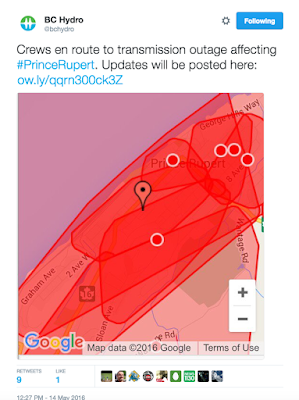 After a string of rather pleasantly warm days on the North Coast, the hottest point of Saturday sent Rupertities in a quest for shade and most likely towards alternative BBQ plans for lunch and dinner, that after BC Hydro suffered a near six hour power outage for all of Prince Rupert and Port Edward.

Stores closed and the city's major industries received an unscheduled suspension of activity as the power interruption moved past the inconvenience stage, to one of having to rearrange plans and schedules.

The lights flickered once or twice and then went out at 11:20 on Saturday morning, as what has been described by BC Hydro as circuit failure at a substation knocked the region off the grid.

As well, to complicate things further for the North Coast, Global BC reported that BC Hydro has advised that as part of the initial power outage, the emergency gas turbine generating system had not functioned as expected.

Hydro crews investigated the issues located at the Skeena substation, working through the afternoon to restore power which was originally estimated to be switched back on by 7.

However, shortly after 5 PM the sound of all those electronic devices in homes across the city began to play the power's back on symphony, as neighbourhood by neighbourhood power returned across the region.

Power appeared to be restored to all areas of Prince Rupert and Port Edward by 5:30 PM.

BC Hydro has also advised that an investigation will be conducted to determine why the alarms related to the gas plant did not go off,  a normal process which would have notified the utility of the secondary issues related to the city's back up system. 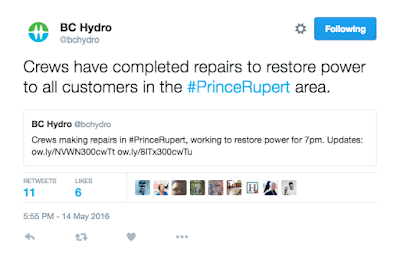