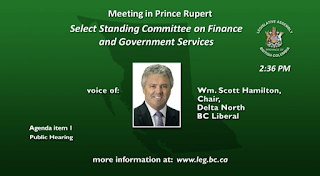 They got off to a late start at the North Coast Convention Centre on Monday afternoon, but Scott Hamilton the chair of the Provincial Finance Committee kept things moving along once travelling delegation of provincial politicians started their afternoon of presentations in Prince Rupert.

The all party group of ten MLA's included two representatives from the Northwest, with Robin Austin from Skeena and North Coast MLA Jennifer Rice both participating in this years consultation process with residents across the province.

As we outlined in our preview item of yesterday, the Prince Rupert stop on the tour is the only one scheduled for the Northwest, making for a full list of participants to await the committee chair to open the floor for presentations.

The proceedings got underway around the 2:30 mark, making for a half hour delay from the original start time.  Once in motion though the afternoon was a fast paced affair as eight local delegations attended in person to make their presentations North Coast issues. While six other presentations addressed more general provincial themes, with five of those six coming by way of a telephone link hook up to the committee session at the convention centre.

From the Prince Rupert participants, the Committee members received background on a range of issues in the community. Covering everything from the fishing industry and housing concerns, to port development, education and some future ambitions from the City of Prince Rupert.

A short capsule of each of the Prince Rupert presentations follows:

UFAWU-Unifor -- A presentation from Christina Nelson the northern organizer for UFAWU-Unifor, offered up a review of the recent salmon season on the north coast and the concerns that her membership have on the closure of the canning lines at the Canadian Fish Plant on George Hills Way.

Ms. Nelson provided the provincial committee with some background on the history of fish processing on the North Coast and the impact that the closure has had on the workers and the community. Noting for the committee that a large number of the fish plant workers did not earn enough hours this summer to qualify for Employment Insurance.

She called on the committee to relay the concerns of the community to the provincial government to help the shore workers of the North Coast requesting that the province implement adjacency regulations that would ensure that communities close to where the fish is caught reap the benefits from the fishery in their area.

Following Ms. Nelson's presentation, a number of local shore workers in attendance at Monday's committee meeting also provided their own accounts of how they have been impacted by the closure of the canning lines at Canadian Fish.

North Coast Literacy Now -- Elizabeth Wilson provided the provincial delegation with a short account of the efforts of the local Literacy Now committee and how they are striving to deliver services to Prince Rupert, Port Edward, Gitxaala, Kitkatla, Lax Kw'alaams and Metlakatla.

PRDTU -- Raegan Sawka offered up a glimpse of the challenges in education on the North Coast, with the President of the Prince Rupert District Teachers Union reviewing the need for an increase in funding for education in the province.

Her presentation highlighted how more funding is required for resources that are needed to implement the revised curriculum and increased aboriginal content as action for truth and reconciliation. As well, she called for improved funding to restore front-line education services for all learners through specialist and classroom teachers and drew attention the to lengthy wait times for children with special needs to get support.

She offered up some notes when it comes to local education, noting the closure of five schools since 2001 and the loss of 12 full time equivalent teaching positions in 2015-16 which she observed is related to a lack of funding for schools in the district.

She also outlined the transportation concerns from parents in the community and the need for the school system to rely on parents for fundraising for such things as playground, classroom technology, field trips and hot lunches to name a few areas.

He offered up the human cost of such concerns as renovictions, rapidly increasing rental costs and a lack of alternatives for some of the poorest citizens of the region, noting that in 2013 he had dealt with three evictions over that entire year, by 2015 that number had jumped to 57 evictions and so far in 2016 he has counted almost one eviction a week as the files build up at his office.

He observed that much of the current situation is related to an influx of construction workers, which he suggests has driven the price of rental accommodation up and how while there once was at least a few available empty units for those looking to for rent, that is no longer the case.

Mr. Kristianson also called attention to the low number of social housing options available in the community, asking that the committee make social housing a priority and take it as a recommendation to the provincial government.

Ms. Bomben also took note of the prospect of LNG development for the region and how the city had developed its Planning for Major Projects process to help identify where the city can accommodate the positive and negative effects of any investment announcements.

A portion of her presentation relayed the City's ambitions for the Prince Rupert airport which it ties in to the growing success for the Port of Prince Rupert, calling the airport a critical link in the development of the port and a key logistical component should LNG proponents make a positive final investment decision.

From potential LNG projects to the expansion of the container terminal and introduction of new port facilities he outlined a path of growth that he says will lead the Port to move into the number two spot in Canada within the decade, moving past Montreal when it comes to total tonnage and container traffic.

He also explored the path the Port is taking when it comes to engagement with area First Nations, recounting how the Port has reached a number of agreements and sharing benefits with the Tsimshian First Nations, opportunities which have also seen results in employment growth for their communities.

As part of the presentation, the Port Authority called on the provincial government to recognize the challenge that many northern communities including Prince Rupert face when it comes to growth issues related to the Ports impact on the region, noting that many communities had suffered economic setbacks at the start of this century and may not be fully equipped to deal with those issues on their own.

The committee also received two local individual presentations before the day came to an end with Luanne Roth and Peter Nelson providing their thoughts on a range of issues on the North Coast.

In addition to the Prince Rupert participation, the committee heard from a number of provincial organizations and groups.

You can review a transcript of the full Prince Rupert session here, as well an audio account of the three and half hours at the North Coast Convention Centre is listed on the Committee home page the link can be reviewed here.

Anyone that wishes to make their own contribute to the Finance Committees consultation process can submit their thoughts by the deadline of October 14th.

Through the week we will be looking at some of the Prince Rupert contributions to the session in a bit more detail, providing some background on the what the North Coast presented to the Committee.

Those follow up stories can be found on the blog in the days to come.

Email ThisBlogThis!Share to TwitterShare to FacebookShare to Pinterest
Labels: BC Finance Committee in Prince Rupert Oct 3 2016