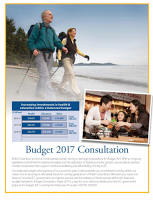 The first presentation to the BC Finance Committee on Monday provided a quick primer on one of the key issues affecting the North Coast economy these days with the opening ten minutes allocated towards issues of the North Coast fishery.

Northern UFAWU-Unifor Rep  Christina Nelson outlined the impact that the closure of the canning lines at the Canadian Fish plant in the city has delivered to shore workers in Prince Rupert, highlighting the struggles that the membership is facing in the wake of the reduced number of workers required over the summer.

As part of her presentation the UFAWU rep provided some background for the Committee on how that decision by Canadian fish has not only changed the nature of the work in the community, but has had a significant effect on the numbers of workers that worked this past season.

"This salmon season Canadian Fishing Company stripped the guts from approximately five million pounds of salmon. Canadian Fish shipped this salmon south to Vancouver or China, where it will be processed into consumer-ready products.

Only approximately 125 workers were needed this year to unload, gut and ship out this huge volume of fish. In the past, there would have been approximately 750 workers canning salmon at the Oceanside plant.

Ms. Nelson then turned the union's attention to the issue of adjacency and how the UFAWU-Unifor sees it as vital to a future for the North Coast fishery. Using a visual display of old salmon can labels, to remind the committee of the work done in the past, Nelson recounted the wide range of product that once came from the Prince Rupert plant operations.

She further observed that while the Pattison company may believe that the canning industry has no future, that doesn't mean that the work they do at other locations in the province and elsewhere can't be done in Prince Rupert, adjacent to the waters where the fish is caught.

If Pattison wants to abandon canning in Prince Rupert, there is no reason why we cannot fillet, portion and freeze salmon, like you see in the packages before you.

We are requesting that the provincial government implement adjacency regulations that would ensure that communities close to where the fish is caught reap the benefits from the fishery in their area.

We have the fish. Meanwhile, the Oceanside plant sits underutilized, and the workers are starving. This is wrong.

The union respectfully submits that the province of British Columbia has an obligation to help the shoreworkers on the north coast so that they will benefit from fish-processing jobs. I want to let you know that many of the workers here today would have been eligible for EI if we had canned. They and their families will have no choice now but to collect welfare. We need adjacency. We should have processed that fish.

The final note of the presentation to the committee was used to explain the union's concerns over regulations related to the allocation of earnings while on social assistance, noting that the current system is not providing much aid to those in the community who are in the most need.

Following the presentation a number of local shore workers addressed the committee panel providing their personal testimony towards the issues that they are facing in the wake of the Canadian Fish changes.

Members of the committee also asked questions to seek clarification on some of the issues raised during the UFAWU presentation, suggesting that the delegation ensure that they submit their documentation on the adjacency issue to the Committee before the deadline of October 14th

You can examine the full transcript from the UFAWU portion of Monday's Committee session from the Legislature Archive website, that portal also features audio link for those interested in the proceedings to listen to to hear the full range of testimony from the consultation.

For an overview of Monday's session see our blog item from yesterday here, an archive of all our features on the Committee consultation at the North Coast Convention Centre can be found here.

More background on the North Coast fishery can be found on our archive page.
Posted by . at 10:10 AM

Email ThisBlogThis!Share to TwitterShare to FacebookShare to Pinterest
Labels: UFAWU presentation for BC Finance committee October 3