Hays 2.0 and Airport access the focus for City in Finance Committee presentation 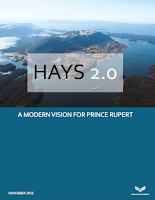 He may not have been delivering the presentation to the BC Finance Committee on Monday, but many of Mayor Lee Brain's talking points of the last year made for the main theme of the address from Chief Financial Officer Corinne Bomben at the North Coast Convention Centre.

When the time for the City's ten minute presentation came up it was the City's CFO who provided the view from Prince Rupert making use of the time available to reinforce a number of popular topics at City Hall of late for the committee.

The ambitious plan from Mayor Brain first released for the public last year, got an effusive review from the CFO, who opened her presentation by calling attention to the Mayor and City's blue print. providing a thumbnail sketch for the Committee of the Hays 2.0 concepts that Mayor Brain revealed for the public in November of 2015.

Last year at UBCM, our mayor announced our long-term vision for Prince Rupert. He called it Hays 2.0, a reboot of Charles Hays' original vision for the community where he championed the Grand Trunk Pacific Railway to Prince Rupert for the purposes of connecting North America to markets in Asia. Mayor Brain signalled at that time the energy and optimism our leadership has for seeing that original vision propelled into this century and retooled to meet the modern demands of a port city with a potential to be world-class.

With an eye towards future development and the prospect of LNG terminal proposals that continue to be part of the North Coast narrative of late, Ms. Bomben also offered the Committee some background on how the City is approaching planning issues related to such large scale developments.

"We have undertaken an exercise called Planning for Major Projects, which has challenged us to identify where we are today, how we can accommodate the positive and negative gold rush effects of an investment announcement, and where we want to be tomorrow. This work is unique in that it is considered planning-led development rather than development-led planning. It further exemplifies our desire to be masters of our destiny instead of leaving it to chance."

Transportation issues, particularly those related to the Prince Rupert Airport also dominated much of the CFO's presentation, with a large amount of attention directed towards the Airport Ferry system and the City's hopes for a larger engagement with area First Nations when it comes to transportation between Metlakatla, Lax Kw'alaams and Prince Rupert.

"We are improving logistics and local access by upgrading our airport and focusing our attention on connecting our First Nations neighbours via the ferry link from our city to the airport. This road and improved ferry access will help connect labour markets opening in our region, expand commercial and recreational opportunities on the other side of our harbour and enable our participation in air cargo, which would expand our shipping capacity to include the airspace.

This new connection is a large undertaking and is still being explored. However, it is one our community and our First Nations neighbours eagerly support. Not only could this address access to our community; it also addresses the ferry infrastructure. Both ferry docks are underrated for weight and are in constant need of repair. The current ferry is at the end of its useful life, and so we are exploring the options for replacing it.

The airport connection is seen as a critical link in the development of our port and is considered a tenuous logistical component should LNG make a positive final investment decision. We are mindful that improvements to this infrastructure should strike a balance for the capacity needs of today and tomorrow. We encourage the province to continue a dialogue with all stakeholders and impacted First Nations, given the importance of this logistical connection."

Other infrastructure notes for the Committee included a quick review of the City's phase one plans when it comes to the city's water system, with Ms. Bomben offering up a suggestion that the group take some time to check out the City's You Tube presentation on the theme of the aging waterlines and supply system.

To reinforce the message on infrastructure the CFO provided some background on the struggles facing the city when it comes to the big projects, noting an infrastructure deficit of some 300 million dollars with issues such as policing and emergency response infrastructure, revitalizing roads and bridges and concerns over landfill capacity, part of the discussion at City Hall.

To bring her message to an end, Ms. Bomben also made mention of the Re:build Rupert and Re:Design Rupert projects that the Mayor and Council have embarked on over the last two years, wrapping those initiatives into the larger Hays 2.0 vision that is guiding the city into the future.

Following her ten minutes, the Committee members made inquiries on a number of areas from housing to health and the focus on infrastructure, with MLA Rice seeking more background on the Airport access concepts.

You can examine the full transcript from the City of Prince Rupert presentation at Monday's Committee session from the Legislature Archive website, that portal also features an audio link for those interested in the proceedings to listen to to hear the full range of testimony from the consultation.

For an overview of Monday's session see our blog item from yesterday here, an archive of all our features on the Committee consultation at the North Coast Convention Centre can be found here.

More background on the some of the issues facing the City of Prince Rupert can be reviewed from our City Council archive page.

Email ThisBlogThis!Share to TwitterShare to FacebookShare to Pinterest
Labels: City Presentation to BC Finance Committee