North Coast MLA Jennifer Rice, who has perhaps been one of the most strident opponents of the Lelu Island location proposed for the Pacific NorthWest LNG terminal, has weighed in with some commentary related to this weeks Federal approval announcement.

This week the Provincial NDP member issued a formal statement on the Tuesday announcement through her constituency page, as well as making use of her Facebook page to deliver her thoughts on the path ahead for the project.

Of significant concern for the MLA was the way the announcement was delivered with few comments from the Federal Cabinet representatives to directly address issues related to the importance of Lelu Island and the salmon resource of the region. 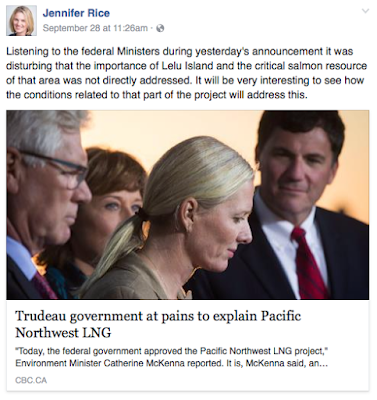 Ms. Rice also took note of the 190 conditions that the Federal government has attached to the approval process and outlined that she will be carefully reviewing them. Providing a checklist of sone of the themes she will be following, as the process moves forward should Petronas decide to deliver a Final Investment Decision on the project.

Among the areas that the MLA is concerned about and will be watching carefully towards are:

The process of inclusion for local and impacted First Nations as true partners with meaningful consultation, a process that will genuinely listen to people's concerns and not be a "Check-box" type of consultation.

Provide for explicit work and training opportunities for local people, First Nations, British Columbians and Canadians and only rely on temporary foreign workers when all other options have been exhausted.  On the theme of hiring, the MLA again wonders if hiring procedures will be legally binding, or if the proponent could say one thing about local hires and procurement and then do the opposite.

Seek protection of our land, air and water including salmon and seafood resources, as well as to make good on our climate change  commitments so we leave the planet habitable for future generations.

The full commentary on the project approval can be found as part of the information stream on the MLA's facebook page.

To review some of her commentary on Pacific NorthWest LNG through the years, see our Legislature Archive page, which has tracked much of her work in Victoria on the theme of LNG development in the region.

Ms. Rice's comments make for the latest in reviews from area political leaders.

Earlier this week MP Nathan Cullen left no doubt in the mind of anyone about his opposition to the selection of Lelu Island as a site for the proposed LNG terminal.

Mr. Cullen took the Federal Liberal government to task over their announcement, calling into question the Federal governments commitment to a renewed relationship with First Nations, observing that he sees the approval of the project as a situation of pushing ahead without proper consultation.

The Metlakatla Governing Council also delivered their verdict on Tuesday's decision, issuing a rather expansive statement which provided their viewpoint on the decision to move forward on the project and how they intend to be part of the monitoring process moving forward.

The City of Prince Rupert took a cautious tone on the theme of the project's approval, with Mayor Lee Brain issuing an info graphic on the topic to provide the city's views.

The short note from the Mayor observed on the potential growth and employment that the project could bring to the region, while noting that the community is looking forward to reviewing the conditions attached to the announcement, as they examine the decision to determine how they address the City's concerns raised through the environmental assessment process.

Mayor Brain also outlined how the city is looking forward to concluding an impact/benefits agreement with Pacific NorthWest LNG, which he states would contribute to securing a final investment decision.

As for the proponents of the much anticipated and controversial project, Petronas the parent company of Pacific NorthWest LNG found itself in the middle of a bit of a media hurricane on Friday.

First as the subject of a story out of Asia that suggested the company was looking to sell its stake in the project, an article which was quickly followed up with another, the second item of the day quoting the province's LNG Minister Rich Coleman as saying that the Malaysian Energy giant had reassured him that they had no such plans in motion.

You can review both of those themes from our blog item of yesterday.

As for any official comment from Petronas on the Friday tempest, so far, they have not provided any media information statement on their website to clarify any of the confusing themes of the end of the week.

More background on the Pacific NorthWest LNG file can be found on our archive page here.
Posted by . at 12:18 PM