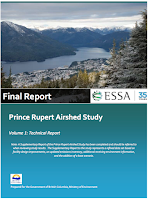 A long awaited study in the Prince Rupert Air shed was released by the provincial government on Friday morning, providing details in to examination of potential effects of industrial air emissions related to potential industrial projects for the North Coast.

The review examined a number of scenarios including the prospect of six proposed LNG terminals, existing and proposed Prince Rupert Port Authority developments and related rail and marine transportation.

According to a statement from the BC Government any potential impacts related to emissions will be manageable through the permitting and regulatory processes and are said to not significantly affect the health of residents or the environment.

The statement adds that the Province, along with industry will continue to monitor air, water, soil and vegetation to ensure that the resources of the region are protected.

The area that was reviewed stretches from the offshore approaches to Prince Rupert harbour to the west, the Kitkatla area to the south, just above the Alaska boundary north of Lax Kw'alaams and inland to the east along the Skeena River.

Among some of the recommendations that conclude the Study.

When assessing potential human health impacts, complement the characterization according to the CCME management levels with histograms or similar characterizations of the relative frequency of concentration estimates without background levels.

air pollutants,  deposition of nitrogen, sulphur and other important parameters for the assessment of critical loads,

vegetation, in order to document the composition, distribution, and health of the sensitive plant communities and ecosystems;

soil sampling and geochemical analysis for regions with deposition predicted to exceed the critical load of acidity;

lakes, to fill gaps in coverage of lakes in the northern part of the study region, as well as on various islands;

When development proceeds, conduct coordinated monitoring in the following areas:

Friday's release of information comes following a number of requests from North Coast MLA Jennifer Rice who had been seeking updates on the progress of the report for a number of months now.

The MLA regularly inquired as to when residents of the region could anticipate being able to examine the document.

More notes on Provincial politics can be found  on our Legislature archive page.
Posted by . at 4:30 PM