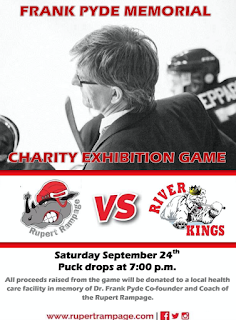 The 2016-17 season for the Prince Rupert Rampage  will be one that on one hand looks ahead to a year of challenging hockey, while at the same time holding to some fond remembrances of the man who helped to bring back Senior Men's hockey to the city.

This weekend, the Rampage will be commemorating the life of Dr. Frank Pyde who passed away August 16th, leaving an entire community to reminisce about his impact on the North Coast.

For hockey fans, Dr. Pyde was known for his commitment to the sport both at the minor hockey level and with his work with the Prince Rupert Rampage, as a founding member of the hockey club and head coach for the CIHL team through its early years.

To celebrate his life, hockey style the Rampage have arranged for a special event for this weekend for the Jim Ciccone Civic Centre.

This Saturday night, the Rampage will be hosting a charity hockey game against their Northwest rivals out of Terrace, with the puck drop schedules for 7 PM.

And while the tempo of hard hitting hockey will continue to the focus of the game, respect for one of the key contributors to the league and the sport will make for much of the backdrop to the game itself.

Saturday night won't be the only time this year that Dr. Pyde will be on the mind of hockey fans and players of the North Coast, Prince Rupert Minor Hockey has launched a project to rename the Prince Rupert Civic Centre Ice rink after one of the keystone contributors to the Prince Rupert hockey scene.

As for the hockey game, it also will provide a measuring stick for the current Rampage players as they prepare for the upcoming CIHL season which gets underway on October 1st when Prince Rupert plays host to the Kitimat Ice Demons to break the ice for 2016-17.

You can find more items of interest related to the season ahead from our Rampage Archive page here.

Correction: As noted in the comment from  reader below, it is the arena at the Jim Ciccone Civic Centre complex that is being considered for renaming, we have corrected our original story to reflect that proposal.

Update:  Saturday night's game attracted a large crowd to the Civic Centre with the Rampage securing a 4-1 victory over the River Kings

Email ThisBlogThis!Share to TwitterShare to FacebookShare to Pinterest
Labels: Rampage to host Charity Exhibition game with Terrace in memory of Dr. Frank Pyde