Fire crews from Prince Rupert Fire Rescue were dispatched to a residence in the 200 block of 7th Avenue West on Thursday afternoon, as a smoke billowed over a residence tucked up the small path that leads east from near the corner of Thompson and Seventh West.

The first call came in around 3 PM with fire crews responding quickly to the residence which was already fully involved upon their arrival. 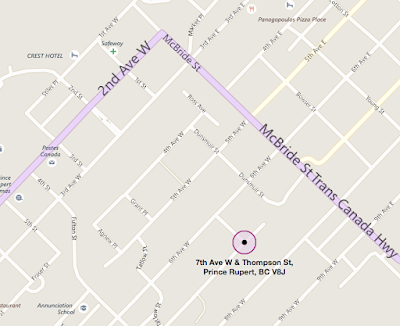 The hard to reach location made battling the fire a bit of a challenge for responding crews, which utilized both the aerial ladder and the work of ground crews from a second truck in attacking the blaze from different directions to try and bring the blaze under control.

Members of the RCMP were directing traffic away from the area and keeping onlookers back in order to allow the Fire crews access to the fire scene.

No injuries were reported as a result of the fire, the cause of which has yet to be determined.

Fire Crews were still on the scene into the evening to watch for hot spots.

More items related to the work of Northwest Emergency responders can be found on our archive page.

Update: September 30 -- As Prince Rupert Fire Rescue begin their investigation into the cause of Thursday afternoon's fire, local residents have begun to contribute to a Go Fund Me Page for Lee Milnes the owner of the house.

You can learn more about their efforts and make a contribution here.
Posted by . at 8:28 PM