The latest addition to safety measures at the Port of Prince Rupert went live yesterday, as the Port announced that its new 5 million dollar Shore-Based Radar System had been commissioned for use,  transmitting data from three tower sites and providing active monitoring and navigational information to vessels that call on the Port's facilities.

We outlined the news of the arrival of the components for the system back in March, when twenty crates holding the equipment arrived from France.

Elevated Radar sites were put in place at Prince Rupert Grain, on Mount Hays and on Dundas Island, along with the installation process required to put the sites in place, testing of the equipment continued through the summer months providing the Seal Cove Coast Guard base employees with their first glimpse of the capabilities of the new system. 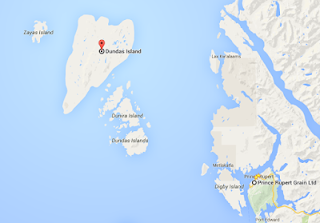 The plan to introduce the addition to coverage of approaches to the Port of Prince Rupert was first introduced back in July of 2015, when the funding arrangement to bring the project to life was finalized.

The addition of the new radar system will improve the capability of Coast Guard, RCMP and the Port Authority to monitor vessels and prevent any incidents in the harbour or to respond to any circumstances that may arise.

The launch of the new system was hailed by a number of those Federal partners and other organizations with constant interaction with the Port, some of their comments and observations related to the goal of safety at the Port of Prince Rupert can be reviewed in this information release from yesterday.

More items of interest related to topics from the Port of Prince Rupert can be found on our archive page.
Posted by . at 9:19 AM