Province announces $500 M Housing program, but with few details on which communities will benefit


Housing it appears will be one of the themes for the next provincial election in the Spring of 2017, with the Liberal government of Premier Christy Clark getting a head start Monday, when it comes to laying the groundwork for their approach to the growing concerns when it comes to affordable housing in British Columbia.

The Premier along with Deputy Premier and Housing Minister Rich Coleman announced a funding initiative on Monday that will see some 500 million dollars directed towards a rental housing plan, though the details of how the program would work and where it will be in place were a little light as part of Monday's announcement event.

The information release that went along with the usual photo opportunities for such things, notes that the funding will provide for a mix of new housing designed to meet the needs of communities across the province, included in the mix will be housing for low-to-moderate income renters, seniors, youth, students, adults with developmental disabilities, Aboriginal people as well as women and children. 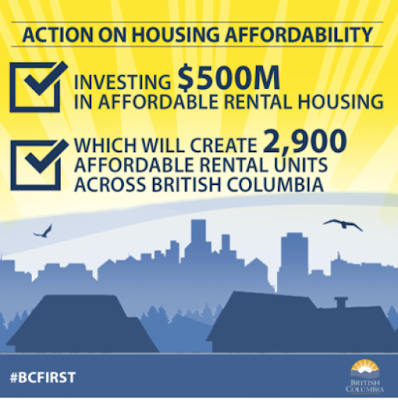 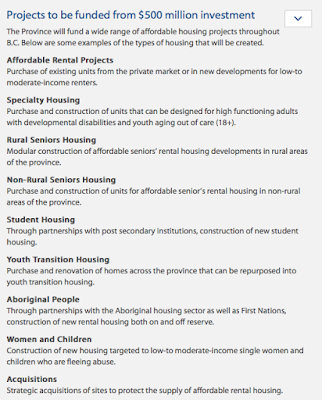 How the Province plans to divide up the funding, or what communities will benefit from it was not part of Monday's announcement. A lack of information that caught the attention of a number of reporters and observers as the announcement was rolled out.

With housing a current theme of concern across the province, many note that the issue is shaping up to be a key part of next Spring's election campaign. Something that suggests we can expect to hear many more announcements on the theme to be delivered through the months to come.

Some  notes on Monday's announcement can be found below:

Notes related to housing issues in Prince Rupert and the Northwest can be found on our archive page here, while more background on provincial politics is available as part of our Legislature archive.
Posted by . at 12:30 PM

Email ThisBlogThis!Share to TwitterShare to FacebookShare to Pinterest
Labels: 000 dollar housing initiative for BC, Province announces 500