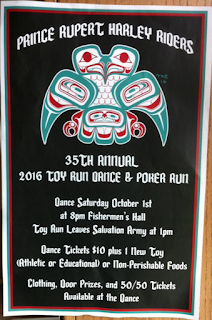 The roar of the Harley's will be echoing through the city tomorrow afternoon as the members of Prince Rupert Harley Riders community and other motorcycle enthusiasts take part in the 35th Annual Tory Run, Dance and Poker Run, a popular even that has delivered support to the Salvation Army in the city for many years.

The event is well known across the Northwest, and seems to grow in participation with each passing year, as riders from many communities along the Highway 16 corridor make their way to the city for the annual run.

Many of them taking advantage of special discounts on rooms that some of the city's hotels have to offer for the out of town participants.

The Riders will depart the Salvation Army on Grenville Court at 1 PM on Saturday, taking to a route that features a number of stops along the way around the Prince Rupert area.

The large group on their motorcycles always brings out the crowds as they roll by, many saluting the efforts of the riders to help make the upcoming holiday season brighter for many in the community.

The evening brings one of the top social events of the year, as Toy Run participants and their guests party into the early morning at Fishermen's Hall on Fraser Street across from Overwaitea.

Admission to the wrap up to the 2016 Toy Run is Ten dollars plus 1 new Toy (athletic or educational) or Non-Perishable food items. As well, those in attendance at tomorrow's event can purchase Toy Run Clothing, as well as have a chance to win a number of Door Prizes, or the jackpot from the 50/50 Draw on the night.

Last year over 100 riders participated in the annual run, raising thousands of dollars in cash and providing for a large volume of food and toys for local charities in the city.

Updates on the 2016 are being posted to a Facebook page that has been created for the Saturday event.
Posted by . at 3:31 PM

Email ThisBlogThis!Share to TwitterShare to FacebookShare to Pinterest
Labels: Harley Riders run this Saturday as 35th Annual Toy Run takes to the streets of Prince Rupert