They have been watching the weather projections at the BC Ferries offices today and with an approaching weather system about to arrive on Haida Gwaii and the North Coast, there has been a revision announced to the next sailing of the Northern Expedition for tomorrow.

The schedule adjustment made necessary by wind and wave conditions that are anticipated for the crossing of Hecate Strait will bring a change that will have an impact on those planning on travelling to Haida Gwaii on Thursday morning.

Earlier today, BC Ferries issued an advisory outlining the change in schedule which will see the vessel now depart Prince Rupert at 7AM instead of its usual departure time of 10AM. 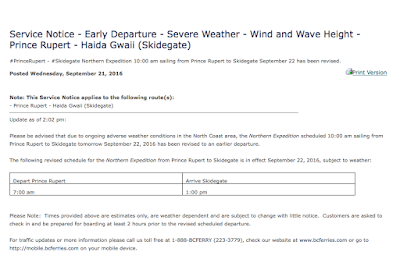 The Environment Canada forecast is calling for Rain arriving on Haida Gwaii around the Noon hour with winds from Southeast at 30 km/h, shifting to 60 km/h with gusts of 80 late into the morning.

The winds continue through Thursday into the evening, diminishing after midnight.

The Haida Gwaii forecast can be reviewed here.

The same system arrives in the Prince Rupert area Thursday in the early evening hours, with wind and rain becoming prevalent as the night moves forward.

Of more concern for BC Ferries is the Storm Warning that is now in effect for Hecate Strait, which may continue to affect the timeline for the return trip to Prince Rupert on Thursday/Friday. 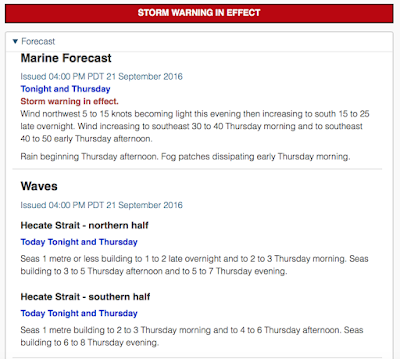 You can find more information on BC Ferries operations on the North Coast from our Archive page here.