The City celebrated the reopening the recently renovated terminal at the Digby Island Airport over the weekend, hosting a community celebration for residents of the North Coast, giving many the opportunity to take a bus and ferry ride over to the facility to see all the changes.

A photo review of Saturday's re-opening event can be found on the City of Prince Rupert Facebook page.

A look back at how the airport renovation evolved can be found on our Transportation archive page.

The completion of the project which was delayed a bit from its original completion timeline, made use of a 7 million dollar loan arranged through the City of Prince Rupert which used the Airport Approval process of November  2013 to provide for the majority of the financial backing for the much needed improvement.

However, as the City's Communication Director Veronika Stewart outlined for TV7 last week, that wasn't the only money that was put towards the project, with an additional 1.5 million dollars apparently required later on from the City of Prince Rupert's Legacy Fund, delivered when the project ran into unforeseen circumstances with construction.

That additional funding was not something that made for the news flow from the City over the course of the last year, with no mention it provided as part of the City's News archive.

And while most in the community probably won't have a problem with the City using that Legacy Fund money for projects such as the airport renovation, they probably wouldn't mind knowing more about when the Legacy Fund is put to use, as the money is spent.

There at times seems to be a definite approach of picking winners and losers by Council when it comes to where the City should allocate some of the money that has been received from the Exxon corporation while the oil and gas giant explores the Tuck Inlet area for a potential LNG terminal.

Once it was created back in 2014 the Legacy fund was used fairly extensively as City Council delivered their LNG Go Plan, making for a fairly enthusiastic push to deliver Mayor Brain's Hays 2.0 vision plan and other associated studies as well as towards other areas outside of the scope of the City's operations, a topic explored at the start of January of this year.

Though there have been a few times since then when the public perhaps has wondered why that additional cash can't be used for those other concerns as well. In recent months the City has faced some serious push back from residents when it came to such things as funding plans for the Library, or increases to recreation fees at the Civic Centre to name a few.

Issues where proposed increases to fees or reductions in grant funding caught the attention of the city's residents.

Council members for the most part have held to their line that the won't use the Legacy Fund for those civic concerns, even if there are some on Council who believe the City should be providing more benefit to residents of the city who may be able to least afford the changes, a theme were some suggest the Legacy Fund might have a purpose.

However, when it comes to delivering a consistent update on the Corporation and the Fund there is little information of late easily found about Legacy, other than the balance statement provided by the City each year as part of its May budget process.

Those interested in some of the financial details related to the Fund have to dig deep into the reports provided for Council meetings, with the most recent Financial Statement on Prince Rupert Legacy Corporation delivered on May 9th as part of the Financial Officer's Report to Council  you can examine the statement from pages 41 to 47.

That documentation is mainly an accounting statement though and reads like one, with few details beyond the numbers. For 2016, the topic of Legacy is one that rarely, has made it to the discussion stage at City Council's public meetings through the year, beyond that early January session during the Library funding issue.

The Legacy Fund website page for its part has not featured an update since 2015's listing of some of the planning for Major Projects that the Fund was used for, an overview which focused on salaries and the range of projects the City launched at the time as part of the City's LNG Go Plan. 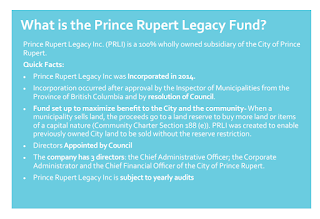 With the City Council now returning to their schedule of twice a month Council meetings starting in October, the fall may make for a timely moment for the Legacy Corporation Board to make a presentation to Council so the city's residents can see how their investment is doing.

It would also allow for City Council members to review how they view the Fund and to be on the public record as to where they see the way the City uses  it in the future and what they believe the money should be used for.

An even better option perhaps, would be for the City to host a public forum on the theme, the public engagement plans once promised by the Mayor and Council during the election campaign of 2014 seem to have been put on the back burner for the most part as the work load increased for Council members after election day.

However, giving the public the chance to share their thoughts and ask questions of Council on how it should make use of the Legacy Fund might help provide counsel for City Council members and be one way to get those once promised public sessions back on the calendar.

Some background on the Legacy Fund can be found on our archive page here, while other conversation topics from City Council can be examined on our Council archive page.
Posted by . at 11:59 AM