The day after it's controversial LNG announcement approving the Pacific NorthWest LNG proposal with its 190 conditions, the Liberal Government of Justin Trudeau found itself on the defensive back in Ottawa.

Opposition members, with some very different interpretations as to how the Liberals handled the file, clearly had been looking forward to the Wednesday session of Parliament, as they fired off a number of inquiries towards the Prime Minister, as well as to the Environment and Natural Resources Ministers.

The Wednesday afternoon Question Period provided the first opportunity for discussion of the Pacific NorthWest LNG approval and the bear pit that the daily question opportunity provides for did not disappoint, as the Prime Minister and his Cabinet found themselves taking shots from all sides of the house.

Things started off in a rather calm fashion with Bob Zimmer the MP for Prince George-Peace River-Northern Rockies, using the Members Statements portion of the session to applaud the decision and calling for the Liberal Government to continue to work towards moving it forward.

However, when they got to the twenty minute mark of the session, the heavy hitters of the opposition benches weighed in, with NDP leader Tom Mulcair outlining the concerns that the New Democrats had with entire process, while the interim Conservative leader Rona Ambrose observed that with 190 conditions in place, the Liberals may have set the table for a decision that could see the Malaysian energy giant Petronas choose to not to move forward with the project.

Ms. Ambrose led off the Question Period attack, providing the Tories view of Tuesday's announcement, noting that even with Tuesday's events there won't be any jobs in place until there are shovels in the ground, calling for the Prime Minister to show leadership on the issue to make sure that the project gets underway.

She further outlined the Conservatives concerns over the approach the Liberals are taking, observing that they are providing for yet another level of consultation before any progress will be found.

The Prime Minister countered that argument by noting that after ten years of failed Conservative policies, the Liberals were actually finding progress when it comes to moving the project forward.

NDP Leader Tom Mulcair took aim at the Liberals and noted that the Prime Minister and his Cabinet were not showing much respect for First Nations.

Observing that the trio of Cabinet Ministers that were part of the announcement of Tuesday's event, did not even travel to the area where the project is to be built to deliver their news.

Mr. Mulcair further noted that the Liberals had basically followed former Prime Minister Stephen Harper's blue print when it comes to the environment and pipeline development.

In response to some of the concerns directed the government's way, the Environment Minister Catherine McKenna touched on some of the factors related to the announcement on Pacific NorthWest LNG, taking a question from MP Zimmer that asked why the Liberals had introduced a 'poison pill' approach to their decision.

To knock down that impression, Minister McKenna retraced the range of consultations that the Federal government conducted and pointed to the 190 conditions that were introduced as part of the approval process and would ensure that the industry would move forward in a sustainable way

Those conditions continued to raise flags for the Prince George MP who called the Liberal approach to development as "one step forward and two steps backward".

The Liberal's plan for resources also provided for concerns from Alberta MP Shannon Stubbs who noted that just because they provided conditional approval doesn't mean that the Liberals actually intend to have the project built.

Adding that while the majority of the assessment took place under the process put in place by the Conservatives, she has a number of concerns over the nature of the Liberal government's plans for multiple regulatory changes that could affect other energy projects.

The Natural Resources Minister Jim Carr picked up the theme from there, noting that each energy project will be judged on their own merits and that they are not all the same, he also pointed to the Pacific NorthWest LNG project as one that will not only deliver jobs to the industry, but bring a pipeline to tidewater for the first time in ten years.

You can sit in on the full Question Period from the ParlVu archive service, the questions for the Prime Minister come up between the 14:20 and 14:30 portion of the session.

The participation of the Environment and Natural Resources Minister on Question Period took place from the 14:56 to 15:01 mark.

As we noted yesterday, while he wasn't in the House of Commons on Wednesday for Parliamentary proceedings, Skeena Bulkley Valley MP Nathan Cullen, who was in Victoria for electoral reform events, did expand on his first impressions regarding Tuesday's Federal announcement, providing a fairly strong reproach to the Liberal approval.

Wednesday the MP also provided a clip of NDP leader Mulcair's questions for the Prime Minister focusing his attention on the NDP leader's call for the need for greater consultation with regional First Nations. 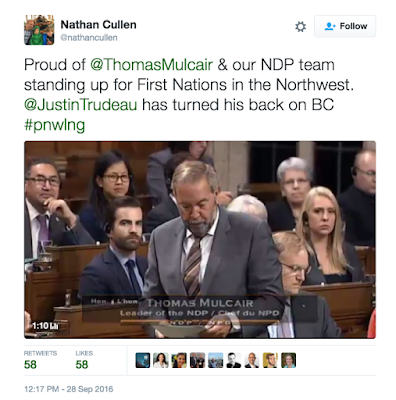 The Green Party didn't get an opportunity to take their concerns to the Liberal government during the Question Period, but earlier in the Day, Green Party leader Elizabeth May outlined the disappointment and anger that her Party had over Tuesday's approval announcement.

You can follow more items related to the Pacific NorthWest project from our archive page here, further background on the work of Mr. Cullen in Ottawa can be examined from our House of Commons archive.

We also have a companion blog, Darcy McGee that explores political themes on the Federal and provincial scene you can find it here.
Posted by . at 10:38 AM