If ever a hurricane, or what's left of one, was to look for a place to make landfall on the North Coast, we imagine one that was once named Lester was destined to find Prince Rupert.

The storm once was listed as a Category 3 hurricane, churning away south of Hawaii for much of this month before weakening to Tropical Storm status, it was further reduced to Sub tropical as it made its way towards the North Coast of British Columbia.

A tip of our rain hat and spin on the weather vane to the CBC's George Baker who made note of the post hurricane leanings of Lester as it meandered its way towards us over the last few days. 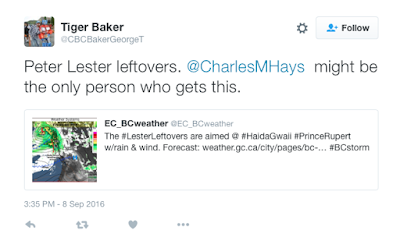 (For those that may be new to the community, Pete Lester was the long time Mayor of Prince Rupert, one of the city's most recognized residents and a politician who served thirty five years at the helm of the City of Prince Rupert.)

Those that have checked the Environment Canada forecast for today and tomorrow have already made their preparations for the wind and rain that has already begun to make its presence felt for the next 48 hours.

The first bands of the tropical system began to come ashore on Thursday evening, with winds of up to 60 km/h noted through the overnight period.

Not much will change for the day today, with Friday bringing the heaviest of the rain along with the winds shifting in direction towards the south and bringing up to 30mm of rain before the midnight hour arrives.

More rain is in the forecast for tomorrow as well, with an additional 10 to 15 mm of precipitation expected before Sun arrives for Sunday and Monday. 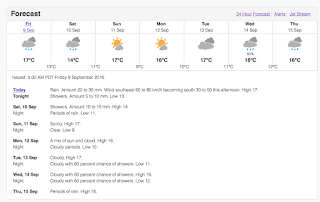 A look at the satellite imagery from Environment Canada shows another system lining up near the Aleutians, something to keep an eye on for those making plans for next weekend.

A look at some of the past weather events on the North Coast can be found on our archive page.

A short power outage affected Prince Rupert at 9 AM on Friday, with the power beginning to return within five minutes.

Email ThisBlogThis!Share to TwitterShare to FacebookShare to Pinterest
Labels: Remnants of one time Hurricane Lester arrive on the North Coast