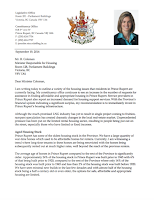 While the BC Liberal government was rolling out its latest announcement on housing issues for the media on Monday, over at the In Box of Deputy Premier Rich Coleman's email account was a letter from the North Coast, as MLA Jennifer Rice outlined a number of concerns when it comes to housing for some increasingly frustrated residents of Prince Rupert.

In the letter released Monday, the MLA provides some extensive background on the housing issues facing the community for the Minister, taking note of the recently declared surplus situation as announced by the governing Liberal's and calling on the provincial government to invest in the housing infrastructure needs for the community.

"My constituency office continues to see an increase in the number of requests for assistance in finding affordable and appropriate housing in Prince Rupert. Service providers in Prince Rupert also report an increased demand for housing support services. With the Province's financial update indicating a significant surplus, my recommendation is to immediately invest in Prince Rupert's housing infrastructure" -- MLA Jennifer Rice's opening comments in a letter to Housing Minister Rich Coleman this week.

She also calls attention to the state or disrepair that can be found in much of the social housing stock in the community, with many units facing chronic rot and mold concerns, noting that many units sit vacant and the system in Prince Rupert suffering from inadequate funding.

The issue of Evictions and Renovictions is a key theme of her notes for the Minister, offering up the comments from social service providers and  poverty advocates in the city who are quite concerned at the increase in numbers for those that have been forced to try and find alternative housing in a tough local market.

She also highlights the events of 2015 in Port Edward when mobile home owners and renters were evicted from the Port Edward Trailer Park, something she attributes to speculation over the talk of the LNG boom for the North coast.

The MLA offers up further concerns over the nature of that speculation and the reality that local renters and the homeless are facing as the waiting for those decisions continues.

"The housing squeeze has been steadily tightening over recent years; however, it has been further exacerbated and accelerated by the speculation resulting from the anticipated but not yet realized LNG industry. Market rental rates are now at Vancouver prices, but Prince Rupert still lacks for the services, amenities and availability found in the lower mainland."

Tying the local rental issues to the LNG file may prove to be an opening however that the Premier and Housing Minister might make use of as the election campaign moves along into the spring.

In recent months they have portrayed the North Coast MLA as one of what they call the NDP's Forces of No, when it comes to any form of development in the region.

The Premier's thoughts on how the NDP  have handled the LNG discussion was something that caught the MLA's attention in February of this year.

Ms. Rice's letter to the Provincial housing minister comes as the BC Liberals outline their latest funding program for housing in British Columbia, a funding allocation of 500,000 dollars though one which is still rather light in details as to how it will all be put into motion.

We outlined the background to that announcement on the blog yesterday. 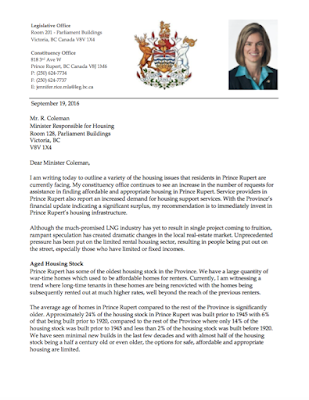 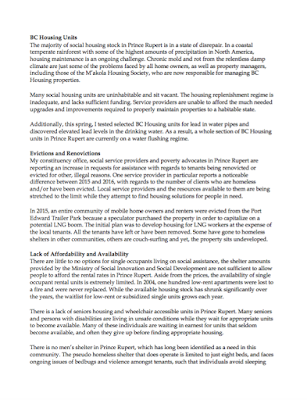 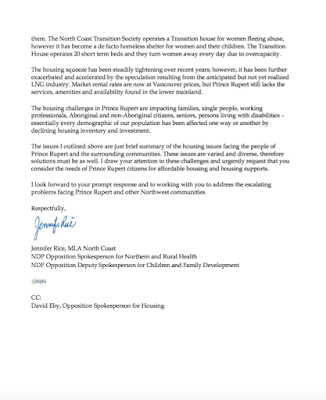 More items related to housing issues on the North Coast can be examined here.

While background on items of note from the Legislature can be found on our Legislature Archive page.