Over 50 Mayors and civic officials from across Northern British Columbia met in Prince George last Friday to review some common issues, as Prince George Mayor Lyn Hall hosted a Northern Mayor's Roundtable to discuss a range of topics prior to the UBCM sessions later this month.

A background item from the NCLGA outlined some of the areas where the group hoped to find some common ground as they looked to take their concerns to Provincial ministers.

Among the agenda points for the gathering included the opportunity to identify common challenges and highlight opportunities where information sharing and cooperation would be beneficial.

Also to be discussed was the format for future round table sessions and the content for them as well as how to make the best use of the scheduling and resources.

In addition to their own discussions, the Northern Mayors and Chairs had an opportunity to talk with Provincial ministers Shirley Bond and Mike Morris in an evening session of the conference.

Port Edward Mayor Dave MacDonald and Terrace Mayor Carol Leclerc were featured in the "class photo" of those that attended the conference, as they brought the Northwest perspective to the gathering.

Also making the trip to Prince George was Smithers Mayor Taylor Bachrach, the Mayor who hosts an active social media presence on-line kept residents of the Bulkley Valley up to date on what was happening in Prince George, providing a number of items related to the conference through his twitter feed over the course of the day long event.

His social media contributions offered up a glimpse at some of the items that the group were considering as part of their discussions. 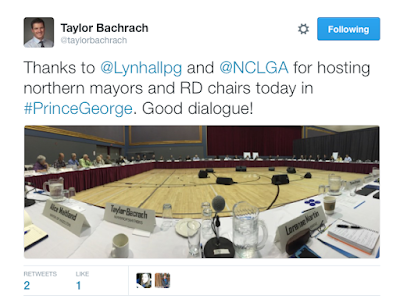 With the Northern session complete, the municipal leaders will now turn their attention towards the annual UBCM gathering later this month, where they will take their list of concerns and observations to provincial officials during the course of the week long conference.

Some of the media coverage from the sessions can be found below: