The long anticipated Federal review of the proposed Pacific NorthWest LNG project came to a conclusion on Tuesday and with a rather rushed media conference, delayed more than a few times through the afternoon, the Federal Cabinet provided its conditional Yes to the proposed LNG Terminal Development at Lelu Island.

The path towards a Yes for Premier Christy Clark's LNG plans actually resembled the course of the project of late, with a number of delays of the official start time while the Federal trio awaited the arrival of the Premier who had been wandering through the Okanagan with the Royal visitors for much of the afternoon.

Once everyone was in place, it was left to the Environment Minister to outline the Federal decision and deliver the talking points that would be examined for every word, with exhilaration and disappointment soon to follow from those who were hoping for a favourable announcement and from those who were just as adamant that any move forward will be a giant mistake for the Trudeau government.

In her presentation Environment Minister Catherine McKenna outlined the path the Federal Government had followed to reach its decision, noting the cooperation it was continuing to seek with First Nations to monitor and participate in the development process and provided an outline towards the 190 conditions that the proponent, Pacific NorthWest LNG will have to meet to see the project move forward.

"The only way to get resources to market in the twenty-first century is if they can be done in a responsible and sustainable manner. This decision reflects this objective. With the legally binding conditions we are putting in place and with British Columbia's commitment to increase its price on carbon in line with the Pan Canadian Framework, I am confident that we will minimize the environmental impacts of the project and ensure that it proceeds in the most sustainable manner possible." – The Honourable Catherine McKenna, Minister of Environment and Climate Change

The Provincial government and Premier Christy Clark welcome the Federal decision offering up a  statement of their own on the announcement, highlighting the lengthy process to get to this point, while pointing to the potential that the development offers to the province

“This is a significant milestone, and the last major requirement for Pacific NorthWest LNG before a final investment decision can be made. As the largest capital investment proposal in British Columbia’s history, Pacific NorthWest LNG represents an unprecedented opportunity to create thousands of jobs and new economic prospects for First Nations and communities throughout our province."

You can review the full announcement from the Federal Government here, while the 190 conditions that have been attached to the decision can be examined here.

The Federal approval brings to an end the long running environmental assessment process and now hands the file over to Petronas, the Malaysian energy giant which first launched the proposed project back in July of 2012.

Following Tuesday's announcement, Adnan Zanial Abidin, the President of Pacific NorthWest LNG issued the first comments from the company related to the approval of the project.

Pacific NorthWest LNG would like to thank area First Nations, stakeholders, local residents and all others involved in the regulatory process for their constructive participation in the science-based environmental assessment. Moving forward, Pacific NorthWest LNG and our shareholders will conduct a total project review over the coming months."

From Kuala Lumpur, Petronas issued a short statement on the announcement of Tuesday, expressing it's thanks to the Federal Government, CEAA, First Nations and local residents for their constructive participation in the process of reaching approval.

They also outlined their satisfaction at the outcome of the review process through a few Asian Media sources in the overnight period.

"The announcement was just made this morning. We need time to look at the conditions and then we will have a review of the project," Petronas CEO -- Wan Zulkiflee Wan Ariffin on the Federal Government approval of the Pacific NorthWest LNG project

The energy company once again reinforced its plan to now conduct a full review of its own before committing to the Multi Billion dollar project for the North Coast of British Columbia.

Among some of their concerns, the current state of the world energy  market and some internal issues that have left the company to issue a large volume of layoff notices in recent months, with speculation in Malaysia continuing to suggest that more job losses are to come.

Beyond the financials of the project in the current market conditions, Petronas officials will no doubt be examining each of the 190 conditions in place, making a decision if they pose any pause for concern for their plans moving forward.

The British Columbia government has already announced its plans to travel to Kuala Lumpur in the weeks to come to discuss the project further, Petronas for its part has not provided any form of a timeline when it comes towards a Final decision and the announcement of the first shovel to hit the ground.

For the Federal Government and the BC Liberals though, the announcement of Tuesday for the most part provides it with cover should the Malaysians decide that the project in the end isn't feasible after all.

Both the Federal and Provincial Liberal governments can now say that they have done all they could towards balancing the impact of industry on the environment and creating conditions for economic growth, leaving the fate of the project now to the investors.

Though there is the possibility that should the project not move forward, both the federal and provincial level of government will have then antagonized a significant sector of the public that were against the project from the outset, such are the political decisions that every government has to make from time to time.

Opponents of the proposed development were quick to release their own statements on Tuesday's announcement, Greg Knox of SkeenaWild Conservation Trust, one of the more vocal of the Northwest groups with concerns over the proposed development, offered up that organization's next course of action with a series of legal actions and other strategies to be developed to see that the project is never built. 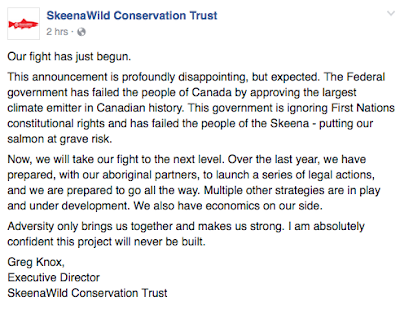 Other groups in opposition to the project were also making their voices heard into last evening.

As for the local reaction, so far the only politician to make a comment on the Federal Announcement was Skeena-Bulkley Valley MP Nathan Cullen, who offered up his disappointment at the direction that the Federal Cabinet had taken on the proposed development through his Facebook page on Tuesday evening. 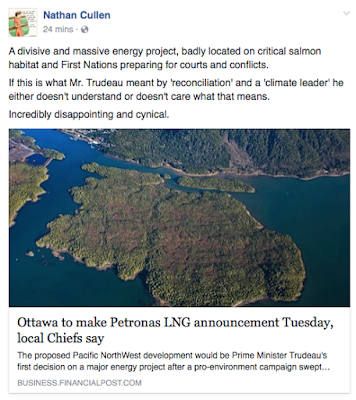 As we post this item to the blog, neither North Coast MLA Jennifer Rice, or Mayor Lee Brain, two local officials who are usually very active on their social media sites had offered up any thoughts on Tuesday's decision and the impact that it may have on the region.

The announcement has delivered some positive reviews from the First Nations LNG Alliance, which outlined its support for the Federal Government announcement through a media release.

While not surprisingly, the Canadian Association of Petroleum Producers, which advocates for energy development in Canada also found the Tuesday announcement a welcome one.

The announcement also caught the attention of our neighbours to the east who found Tuesday's announcement something worth sharing with their residents, as the Terrace City Council took to twitter from the UBCM gathering in Victoria. 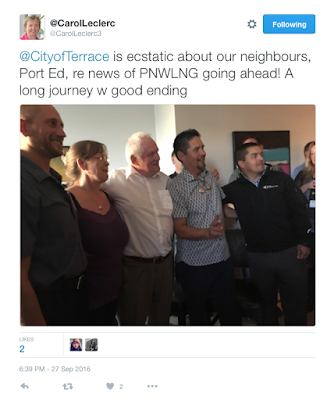 The Premier will get another opportunity to provide some comments and more background later today, when she addresses the UBCM Convention at 2:15 PM, you can view that speech from this link to the convention events.

As might be imagined, Tuesday's announcement has generated a large amount of media attention, some of the notes on the Federal Government's decision can be found below:

You can review the background to the Pacific NorthWest LNG story through our archive pages found here.

Email ThisBlogThis!Share to TwitterShare to FacebookShare to Pinterest
Labels: It's on to Malaysia for the next decision on Pacific NorthWest LNG