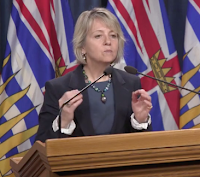 Some key notes of interest to Northern British Columbia have gained some attention during the course of the Question and Answer periods this week from Health Minister Adrian Dix and Provincial Health Officer Dr. Bonnie Henry.

The focus for the commentary that of the preparation work and ongoing efforts towards the COVID-19 response making for some of the themes for the week.

Monday the work of health officials across Northern British Columbia received some recognition, with Dr. Henry observing on some comments and recommendations in a recent  Open Letter from Dr David Bowering, the former Chief Medical Officer for Northern Health.

And like the rest of the province, every case is investigated, all the contacts are notified and they are following the same procedures as we are everywhere else.  So people in those communities who are at risk know who they are and they have been isolated, they have been quarantined, people have been treated in hospital there.

She also observed that in the situation of the work camps in the northern region, many have gone to a limited staffing situation and reducing the risk in those areas, highlighting the work that Northern Health has done towards those goals.

"In terms of the Industrial camps, that is something that we've been working with Northern Health in particular, but across the board in the North.

Many, if not all of them have gone to a very reduced staff. For various reasons, we don't want as many people coming in and out of the community. They've done things like extending the length of time that people are there, going to safety staff only.

I think it's important to recognize you just can't abandon a large mine or industrial site; that's not safe, it's not safe the community or for the environment as well.

So, Northern Health has been very active working with the Industrial camps in the north to reduce the risks in those camps and to make sure that they're scaling back appropriately to be able to put in place the measures that we have required and under our PHO order in those facilities to reduce the risks to the people there and also to the communities around those camps"

Her comments on Northern Health start at the 40 minute mark

On Tuesday, Dr. Henry also addressed another topic making for discussion in the north, that of why the Province has only identified cases by Provincial Health region and not by individual community; noting that it is not a non-disclosure policy but how the province does business in terms of Public Health.

She highlighted how the process works that when there is a risk to the public that they cannot identity individuals who might be exposed to somebody with a disease, in this case COVID 19, they put that information out publicly.

Dr. Henry made note of some recent examples where people were in public spaces, or in certain premises and others at risk could not be identified  where they put that out in the public domain, an approach that they have always taken.

"I think the challenge right now is, that these things have evolved over time and initially of course we had very small numbers of people who were coming in from other countries and it became incredibly important to make sure that they were not individually identifiable. Because with this disease as with many communicable diseases there is still very much a stigma associated with it"

The Doctor also noted how the practice is one which is being used across the country and is consistent in how they are applying the approach towards the COVID-19 response.

She also observed that now that there is community spread, there is no ability to know everybody in our environment who has this disease. She reinforced the need to adhere to the measures in place towards social distancing and reduced contact, noting how the need to put space between us is particularly important for smaller communities where there have yet to be any tested cases.

"This is not something that is about protecting people's privacy necessarily, though that is obviously an important consideration. It's about risk to the public and understanding where that risk is, and the measures that we all need to take in our communities across the province."

He also observed as to how managing the situation provincially has delivered a range of advantages and will continue to do so as the response to COVID-19 continues.

You can review the many responses to the line of quesitons starting at the 28 minute mark of the Information update from Tuesday.

The string of second guessing, as Vaughn Palmer notes in this informative piece in the Vancouver Sun, has become somewhat of an occasional  theme of late as the province continues to respond to the health crisis in British Columbia.

For more notes related to the provincial response to COVID-19 see our archive page here.
Posted by . at 11:02 AM

Email ThisBlogThis!Share to TwitterShare to FacebookShare to Pinterest
Labels: Dr. Bonnie Henry on the work of Northern Health on COVID 19