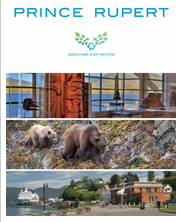 In their latest update for stakeholders, Tourism Prince Rupert has relayed a few notes on their evolving plans towards how they will respond to the economic hit that the COVID-19 health crisis has brought to the vital tourism industry in the Northwest.

Working closely with their partners at Northern BC and Destination BC the local tourism group is working on a recovery strategy for the future.

One that will include a marketing campaign that will be ready to market Prince Rupert's tourism offerings to local residents and regional residents once the days and orders for social distancing are at an end.

For now however, Tourism BC, like their tourism partners across the region are discouraging all travel to the region through their social media channels, website and their email list. 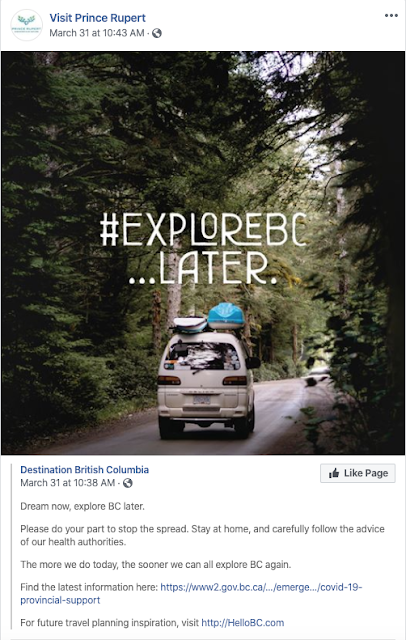 As for the local industry, at the end of March, it was announced that the North Pacific Cannery will remain Closed for 2020, with the Port Edward Historical Society making the decision to keep the popular Historical site closed to the public until the 2021 summer season.

That move seems to have followed a Social Media Post on Mayor Lee Brain's Facebook page, which made note of the Mayor's comments on the sport fishery, an area that is under the regulation of the Federal Department of Fisheries. 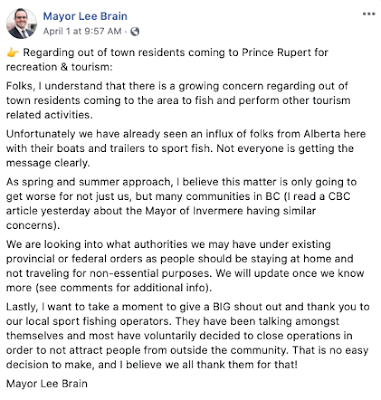 The Mayor's Social media messaging, once again delivered a number of comments from his followers that made for some alarming concepts for enforcement of an industry that the City has little authority over and which is an area of note which they can only offer suggestions towards.

Beyond that, the Mayor's topic appears to have incited some significant animosity towards anyone from outside of the Prince Rupert area.

That outburst is something that will require some extensive work towards rebuilding the tourism profile for Prince Rupert, for those days when travel is again something that is allowed again and welcomed by some ...

On the topic of Non-Essential Travel, which would include Sports Fishing and other such tourism ventures at this time; during yesterday's Daily Update from the Public Health Officer, Dr. Bonnie Henry reinforced her stance on such activity.

"There are many of our smaller communities that are very concerned about people coming to vacation homes, fishing lodges etc., and I am asking people now to forego those types of travel.

All Non-Essential travel, particularly to smaller communities, where we might not have the resources to support you should you become ill, or should there be transmission in those communities.

And that's a really important thing that we need to do now, to protect those who are more vulnerable in those communities, particularly our Seniors and our Elders in our small and remote communities around the province"    -- British Columbia Public Health Officer, Doctor Bonnie Henry

Following her daily update, Skeena-Bulkley MP Taylor Bachrach and fellow NDP MP Gord Johns penned a letter that called for Sport Fishing licences to be restricted to only British Columbia residents at this time. 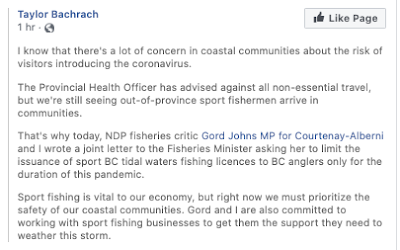 The letter from the two MP's can be reviewed here.

You can explore on advisories and updates from Tourism Prince Rupert through their archive page here.

For more on the Tourism industry in the Northwest see our archive page here.
Posted by . at 9:52 AM