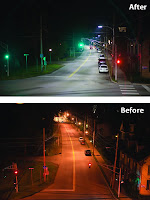 As Rupertites make their way around town in the evening hours, they may be noticing a different hue to the evening skies of the city.

The City of Prince Rupert has released details of its work in progress to replace the city's street lights, with the orange hue of previous fixtures giving way to a whiter shade of light.

More about the move to LED lights can be found here, as the city explains the benefits of the new fixtures part of a partnership with BC Hydro Power Smart and the Pacific Green Energy Initiative "Smart Street Lighting Project".

The Lights are the creation of a Nova Scotia based company LED Roadway Lighting, who have more details on their innovative lighting system here.

With an expected street life of 20 years the new lights are anticipated to shave between 30 to 50 per cent off the City's annual power consumption.

An interesting aspect of the new lights is that they will apparently send a message to the city should there be an outage and what that problem may be. Reducing we imagine the need for citizens to call in the street light outages to the Engineering Department as is the case today, as well as providing for a quicker period of time in responding to the situation.

The City would seem to be hoping that savings incurred from the new street light replacement program will provide for financial resources in the future for other infrastructure requirements.

For star gazers (when the skies are clear that is) the new lights, will according to the city, prevent what is known as sky glow and are considered dark sky friendly. Offering up the chance to star watch and perhaps wish upon a star, when that first star of the night appears.

Council, considering their recent discuss on local infrastructure, shall perhaps reserve the right to the first wish of every evening.

Email ThisBlogThis!Share to TwitterShare to FacebookShare to Pinterest
Labels: New street lights for the city