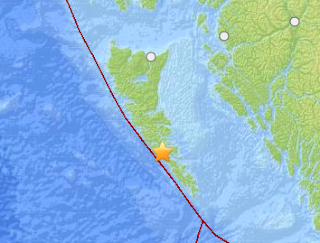 Thursday has become a rather active seismic day for Haida Gwaii as the Islands have felt the earth rumble at least five times (and counting) as we head into the evening period.

The first of the temblors, of 3.9 magnitude rattled the Islands at 9:18 this morning.

Things went silent through the morning and afternoon, then earlier this evening, a string of four quakes rumbled along the Haida Gwaii Fault line in the following order.

The nature of the quakes was not anticipated to provide for any damage and No Tsunami Alerts were generated by the swarm of quakes today.

Since last October's major 7.7 quake on Haida Gwaii and the early January 7.5 quake off of Southeast Alaska, the media in BC has been a little more interested in the shifting of the plates of the North Coast, as the reports came in of today's swarm, media outlets offered up a variety of items on them, so of which can be found below.

We will update the above list for Thursday, as developments warrant.

You can review our archive of past seismic events here.
Posted by . at 8:12 PM