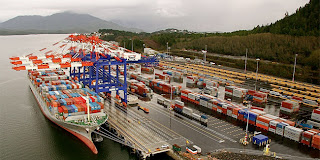 It's perhaps the worst dream that US Port officials could have, the prospect of Canada's major ports claiming an even larger share of the traffic that currently makes its way to US destinations.

Yet, that's exactly what could happen in the near future, as the Asia Pacific Foundation advises in a recent report.

The report called Seizing the Continent, outlines how American port and rail capacity has reached a congestion point, with little scope for forward momentum, all while Canadian ports have developed an impressive infrastructure and find that they still have much room to expand.

Pointing towards the good working relationship with the nations two railways, the Foundation highlights the opportunities available to the ports of Vancouver, Halifax and Prince Rupert,  a prospect that could see Canada claiming 10 percent or more, of the container volume destined for North America.

At the moment, Canadian ports have only a 5 per cent share, but with the transportation grid in place in Canada and much room for expansion, the belief is, that within four years Canada's ports could up that share to 10 percent.

An accomplishment which would translate into much growth and job opportunities for the communities they serve.

The Asia Pacific Foundation found that the working relationship between CN and CP with the nation's three major container ports is a blue print of sorts for success, with excellent links and access to US markets.

Much of that can be found in the Pacific Gateway strategy that the Port of Prince Rupert uses, which has goods unloaded in Prince Rupert destined for the US in an impressive turn around time.

A successful arrangement that is finding much favour with shippers looking for faster access to the US Midwest.

The timing of that expansion of trade through Canadian ports would seem to fit right into the Prince Rupert Port Authorities plans for Fairview expansion.

Should all fall into place, the rising tide of Pacific trade will be directed towards Canada, just as Prince Rupert is ready to accept it.

With the Port already finding throughput increasing in leaps and bounds, the future it would appear seems quite bright for even further expansions and placement of Prince Rupert as a key destination for shippers around the Asia Pacific region.

You can review the Summary Report for Seizing the Continent here.

The Asia Pacific website offers up further information on matters of interest to global trade, offering an interesting glimpse into how Canada and in particular Prince Rupert continue to play a growing role in the transportation links between the continents, the full website can be found here.

Our archive of items about the Port of Prince Rupert can be found here.

Some of the media reviews of the Asia Pacific report release can be found below.

Email ThisBlogThis!Share to TwitterShare to FacebookShare to Pinterest
Labels: A bright future for Canada's ports