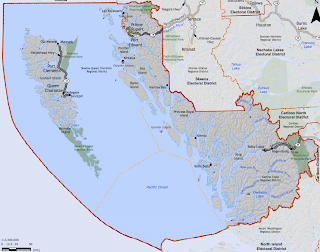 The BC Liberal Party has revamped its website to reflect the upcoming provincial election, replacing the feature of Ministers portfolios and MLA's information, with a listing of candidates for the May 14th election day.

Yet, for North Coast residents, there is something missing in that listing of the names.

When you click on the Meet our Team section, the Liberals seem to be missing a name and smiling face between New Westminster's Hector Bremner and the North Island's Nick Facey.

While, neighbouring Skeena has been quick to the Liberal fold, with  Carol Leclerc having secured the nomination late last year and setting  in motion her challenge for Robin Austin's seat in Victoria.

On the North Coast, the Liberals apparently are still without a name to put forward publicly for the ballot for our trip to the polls.

A worrisome sign that this riding may just be ceded as NDP territory this time around, framed in the prospect of an election campaign that the pollsters suggest, may be a rough one for the governing Liberals.

There has been little mention of the North Coast on the usual Liberal platforms of late of their website or twitter feeds.

There is some talk around town, that perhaps the Liberals may make an announcement this week, providing North Coast residents with the political resume to review over the Easter weekend.

If so, it will be a welcome addition to the North Coast political debate. So far, only the NDP have a candidate on the ballot, with City Councillor Jennifer Rice set to have the easiest trek to the campaign trail on the North Coast in recent history.

As of Friday, the NDP candidate was a pretty lonely candidate for office, with no one to debate, no one  ready to step up and offer up a challenge.

There was that grass roots movement of a few weeks ago to draft Joanna Larson to the campaign trail. The Prince Rupert District Teacher's Union head finished second to Ms. Rice during the NDP nomination process, but her possible candidacy as an Independent it seems, would still be a welcome thing for more than a few North Coast residents.

Ms. Larson has been in Vancouver for most of the week attending the BCTF convention, so she's been out of the Prince Rupert political circuit of late.

In recent days there have been no public comments made over the speculation of her possible candidacy, nor has there been any further information coming from the originators of that draft Joanna Larson campaign.

As we move closer to the active campaigning phase of the election process, the pressure to have her jump into the race may continue to grow, especially considering the lack of interest among the other parties in the province.

It would be a rather interesting testimony to the nature of politics on the north coast at this time, if Ms. Rice's quest for office in Victoria ends up being an uncontested acclamation.

It's that prospect that have quite a few North Coast residents hoping somebody, anybody, steps up quickly to at least offer up a full review of the issues of the riding and provide the candidate who may  best represent it with an eye towards the future.

You can review our recent items of note on the North Coast political scene from our Election Desk North Coast archives.

We also have a wider overview of the upcoming election available here.

Email ThisBlogThis!Share to TwitterShare to FacebookShare to Pinterest
Labels: Waiting for another North coast candidate