The Mayors discuss the impact of development on the North Coast

As part of the review from the Bill Good Show of recent events on the North Coast, was a section dealing with the recent past in the region and how the economic situation is only just beginning to come back after a decade of job loss and population decreases.

To discuss that aspect of the North Coast picture and to look towards the future, Mr. Good had Prince Rupert Mayor Jack Mussallem and Port Edward Mayor Dave MacDonald as his guests in the 9:30 to 10 AM block of the program.

The first part of the half hour reviewed the recent past, the effects that the closure of the pulp mill, the dismantling of North Coast Timber and the closure of a number of fish plants has had on both communities, how the population has dropped from 18,000 to 13,000 with a number of families having to pack up and leave to find employment options.

The second portion of the half hour offered a look ahead.

Mr. Good asked Mayor Mussallem if there is concern over the prospect of a change in government in May, with the Mayor advising that he believes people have concerns and are looking with caution to the prospects of the future.

Mayor Musallem provided a bit about the advantage of the Port of Prince Rupert in the global shipping world and the efficiencies of the CN line that runs through the Rocky Mountains, as well as the nature of the Fairview Container Terminal and its quick turn around time to the US Midwest.

On the LNG prospects, the Mayor said that the community anticipated job expansion should those projects move forward, advising would be job seekers from outside the community of the still reasonable value of real estate in the community.

Mayor MacDonald stressed the need for local youth to gain the proper education for the jobs to come, touching on the education offerings at both UNBC and NWCC, and how he hopes that with the prospect of new jobs on the horizon local youth will remain in the community.

In the closing moments of the half hour, more on the topic of educational opportunities was discussed. 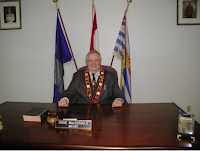 The nature of the discussion provided for the theme that the days of local youth having to leave town to find employment may soon be at an end, with signs of population growth already being felt in the region.

The transit of local students to Prince George to attend UNBC as well as those who attend the local campus of NWCC was discussed and how they play an important role in the development of the North Coast.

Mayor Mussallem also touched on the recent announcement from Ridley Terminals, NWCC and SD 52 over training, as well as the opportunity for First Nations residents to gain employment with the prospect of new jobs on the horizon.

Mayor MacDonald offered up the view of the prospect of new housing in his community as the projects begin to take shape, with the District looking to develop new tracts of housing and services in his community.

Mayor Mussallem was asked if Prince Rupert was a community that welcomed change, his reply was that Prince Rupert remembers the days of lost population and touched on the plans to the future, including the proposed boundary expansion discussed at council on Monday night.

You can review that portion of the program from the CKNW Audio Vault and from their Podcast portal.
Posted by . at 12:35 PM

Email ThisBlogThis!Share to TwitterShare to FacebookShare to Pinterest
Labels: The Mayors on the Bill Good Show discussing the recent past and looking ahead to the future