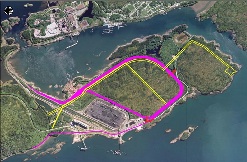 It's the largest construction project in Prince Rupert since the Fairview Container Port's first phase was completed and with the first shovel of dirt on Friday afternoon a new chapter in Port related development is underway.

The much anticipated road, rail and utility corridor project was launched on Friday, as dignitaries gathered to witness the start of a foundation for future growth not only for Container Port development, but that of further industrial development on Ridley Island and beyond.

Details of the day's events can be found in this News Release, which outlines the scope of the project ahead and the importance that is being attached to it, not only locally,  but provincially, nationally and internationally.

The 90 million dollar expansion of infrastructure (full description here) will provide for a solid blue print for the local industrial engine that the Port and its associated terminals has become in the region.

When work is completed, the corridor will change much about the course of development for the Port, Ridley Terminals, the Grain Elevator and looking towards the future, the prospects of LNG terminal development and a potential potash terminal for the region.

The eight kilometres of track, a set of five rail tracks designed to make a loop around the industrial lands of Ridley will be complimented by a port owned hydro line development and the creation of a two lane road project that will eventually link up the Fairview Container port with facilities on Ridley Island.

The corridor project is the precursor to further expansion westward from the current container terminal footprint, and offers up the foundation for the more long range prospect of Container Port expansion.

Representatives of the Federal, Provincial and various municipal governments in the region were on hand for Friday's ceremony, as well as key members of Industry from CN and the Port of Prince Rupert.

Among some of the dignitaries in attendance for Friday's groundbreaking ceremony were the British Columbia Minister of Intergovernmental Affairs, Mary Polak, who highlighted the importance that Prince Rupert is taking on the world stage of shipping; "the Port of Prince Rupert's growth is creating jobs and opportunities for families in the Northwest and helping our economy across the province."

Prince Rupert Port Authority President and CEO, Don Krusel, touched on those thoughts with his remarks at the official ceremony, reminding the audience that "the Port of Prince Rupert continues to draw the attention of investors to gain capacity for the movement of cargo from all sectors of Canada's resource economy."

Bud Smith, the Chairman of the Board for the Prince Rupert Port Authority reviewed the nature of the project and the many benefits that Prince Rupert will have to offer upon its completion; "We are integrating the new terminals into the world-class service and security architecture at the Port of Prince Rupert. Through our increasingly diversified port complex, the Canadian resource sector will be linked to a world of opportunity."

CN Rail's General Manager, Doug Ryhorchuk also provided a look into the impact that the Port of Prince Rupert is having. Not only on the railroad, but on the shipping world as well, observing that; "The growing awareness of Prince Rupert as a North American gateway to Asia has created global interest in the port and the northwest region for investment and commerce"

It's anticipated that the majority of the  90 workers to be hired locally for the project will come from the local First Nation communities of Metlakatla and Lax Kw'alaams, as well as from the Gitxaala Nation.

Global TV featured the day's developments on their Friday newscasts.

The remainder of the Media coverage on the launch of the project can be found below.