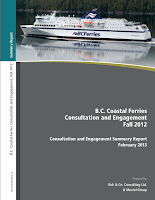 The Province of British Columbia released its consultation report into BC Ferries on Tuesday, a wide ranging document put together by Kirk and Company Consulting and the Mustel Group, which held public sessions up and down the Pacific coast and compiled the comments for further review.

The Report titled B. C. Coastal Ferries Consultation and Engagement Fall 2012, was culled from public  sessions that took place from October 20 to December 21st of 2012, designed to seek feedback from the public and stakeholders about the nature of the challenges facing the coast ferry system.

In total, 2,056 people attended 41 consultation events, with 1,259 providing feedback forms for further review. In addition 703 written submissions were received and 500 people were randomly selected to participate in an online public opinion poll.

The genesis of all that consultation was two part.

The first, was to  seek feedback  on the challenge provided by the BC Government to have BC Ferries achieve 26 million dollars in savings to 2016.

The second was more of a long term vision, inviting feedback on what strategies should be pursued to achieve the long-term vision of connecting coastal communities in an affordable, efficient and sustainable manner.

The government has until June to provide notice to BC Ferries as to their cost cutting plans for the service.

Surprisingly, considering the importance that North Coast residents put into both the Port Hardy and Haida Gwaii runs and the fact that Gary Coons the now outgoing NDP MLA for the region was the NDP Ferries critic at the time, the comments section of the report featured few comments from North Coast residents.

The stop on Haida Gwaii took place from  November 6-8 and at that time, the synopsis of commentary from the Islands can be found below (click item below to enlarge). 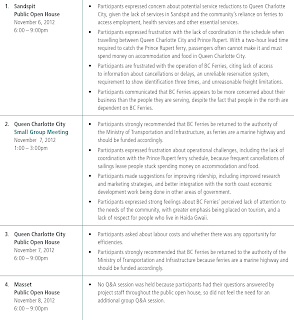 The Prince Rupert stop was on November 9th and there were a few observations at the time on such things as fare structure, the need for seat sale like promotions and concerns over job loss, tourism, possible service reductions and the service the ferry provides in winter with dangerous road conditions.

The synopsis of the Prince Rupert session can be found below (click item below to enlarge).

The bulk of the commentary and concerns however, seems to be more southern based, with residents of the Islands of Georgia Straight, Nanaimo and Vancouver Island offering up many thoughts on the current state of the coastal ferry system.

You can review those comments and all facets of the report from the Coastal Ferries Engagement website.

With a provincial election on the way for May, it will be with interest to see the fate of the document released on Tuesday.

Should there be a change in government, as many seem to suggest, then there's every possibility that the study will be left to gather dust. As the NDP offers up its direction for BC Ferries.

Should the Liberals return to office, then perhaps, we will see some further examination of the findings from the consultation period and as indicated the need for some kind of action on the current state of BC Ferries.

Regardless in the short term, North Coast residents as well as those travellers in southern locales can be sure of one thing, until after the election there won't be any ferry increases or service reductions put in place.

Update: So much for our misguided speculation on no rate increases during an election campaign, BC Ferries announces fare increases for April 1st

Some of the media coverage of Tuesday's document release can be found below.