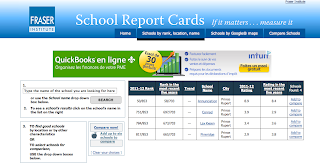 The Fraser Institute has released their latest findings on the nature of elementary school education, an always controversial document that some consider helpful and others destructive.

This years province wide findings include three schools from SD 52, Conrad, Lax Kxeen and Pineridge, as well as the Independent School in the community, Annunciation.

The Fraser Institute score sheet, such as it is, ranks the schools on such elements as Reading, Writing and Numeracy at the Grade 4 and 7 levels. Their findings can be found below.

Annunciation claimed the best ranking of the local schools , marked at 58th out of the 853 schools, with a rating of 8.9. The review of their snapshot can be found here.

Of those schools listed from SD52 the rankings were as follows:

Conrad School was ranked 697th out of 853, with a rating of 3.9
The review of their snapshot can be found here.

Pineridge was ranked at 817 out of 853, with rating of 2.9
The review of their snapshot can be found here.

The local overview of education at the elementary level however is not complete. As not included in the survey, for  reasons not recorded, were the results of Roosevelt Community School, or those of the Port Edward School.

As well, the public schools above would only be rated on their Grade 4 results, as Prince Rupert now has a Middle School in place for Grades 6-8.

The lack of data for those schools would seem to provide a less than complete examination of the local schools in the SD catchment area.

This year's rankings of those schools included in the listings however, do provide an interesting review of the family situation at each school. Featuring a breakdown of Parent's average income, a category that provides what many may consider some surprising data, ranking the schools as such:

Other Schools in the Northwest and province wide can be found here with a search of the database, though again, it appears that a few schools are missing from the data package, which would seem to provide a less than thorough overview.

The results from the Fraser Institute rarely elicit much in the way of comment from School Districts across the province, with many calling into question the methodology used and the impression that other social factors aren't considered in the cut and dry statistical review of the basic test results.

The controversy over the Foundations Skills Assessments, from which the Fraser Institute culls it statistical review is one of the fiercest currently in place in the schools.

Still, some do point to the baseline stats as an indication as to where student achievement is at in the particular snapshot period.

The controversy over the annual release of them however, is reflected in the number of items found in newspapers and news broadcasts in the days that follow each release.

Next up for the Fraser Institute is their Secondary School Report card, which will be released later in the spring.
Posted by . at 10:25 AM