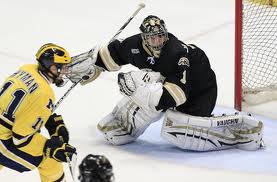 For Prince Rupert's Frank Slubowski today is game day, the start of a best of three showdown with the Michigan Wolverines and a chance to keep moving forward towards the goal of the NCAA"s Frozen Four Championship.

The weekend series with a long time cross state rival promises to provide a high quality of hockey, combined with some pretty passionate support from the Bronco's fans Kalamazoo's  Lawson Centre.

The WMU Bronco's goaltender has already had a pretty impressive year, heralded by his Bronco team mates as the foundation for their success this year, a finalist heading into the second round of Hobey Baker voting and as of this week named to the all Conference team for the CCHA, the conference that the Bronco's play hockey in.

All in all a pretty impressive run for the Rupertite and with two wins this weekend, he and his Bronco's season will carry on.

The Broncos have the following schedule ahead of them this weekend

For those looking to listen in on the play by play, WZKO will have broadcasts of all three games.

Success on the weekend will take the Broncos on to the second round and with a victory there possibly the CCHAChampionship in Detroit on March 23rd.

After that the Frozen Four in Pittsburgh could be in their sights for April.

Below you can review some of the pre game items on the Bronco's quest for a US National Championship.

You can catch up on some of our past items on his time at WMU below.

Items on other PRMHA players and on minor hockey in Prince Rupert can be found in our archives.