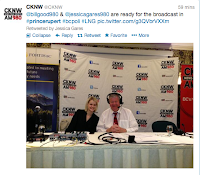 For those that couldn't take in the Bill Good Show broadcast from Prince Rupert on Tuesday we offer up a bit of a review of how the program went today and the various featured items that it provided a look at.

The Vancouver based broadcaster, host of the number one rated talk show in the province arrived in Prince Rupert as part of his "Good in your Town" sessions, a day dedicated to learning more about the issues and hopes for our community.

Our blog previewed the tour in past posts, with a look at his Prince George session of last month as well as a look ahead to the session planned for Prince Rupert.

The morning offered up a wide ranging review on a number of topics of importance to the Northwest, with a primary focus on the proposed development of LNG terminals on Lelu Island.

The show featured a number of Industry representatives, politicians and community leaders on hand or available over the phone, all eager to provide background and reaction to the various issues that were raised.

The program provided a valuable window for Prince Rupert to update the rest of the province as to the developments in the Northwest and how the community is attempting to bounce back from over ten years of economic troubles, a situation that saw businesses close and families leave town or split up owing to the need to seek work elsewhere.

The growth of the Port as the new engine for the region, was just one of the many points for discussion Tuesday. Making the broadcast a three and a half reminder for the rest of the province, that much of the province's future may come through the Gateway of Prince Rupert.

Here is our archive of the major themes from Mr. Good's visit to the North Coast. A timeline of the three and a half hours, which if inclined you can review through the CKNW Audio Vault or through their Podcast portal.

The Mayors Review the state of the region

Port Development into the future

Other Projects and growing optimism on the North Coast

Email ThisBlogThis!Share to TwitterShare to FacebookShare to Pinterest
Labels: Archive of themes from the Bill Good Show in Prince Rupert March 12 2013