Stockpile your umbrellas while you can... 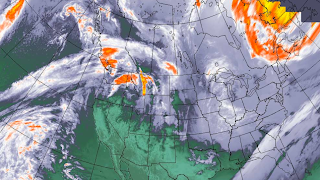 A climate researcher has some bad news for those on the North Coast that may like the odd sunny day, in short her advisory is the wet, will get wetter.

Which for anyone familiar with the weather systems of the North Coast probably would suggest that our rain forest like qualities will continue on global warming or not.

Jennifer Francis of Rutger's University in New Jersey offered up the global weather forecast recently at a Vancouver symposium on climate change.

At the heart of her theory is the observation is the nature of the quickly warming Arctic and the disappearance of sea ice, which has resulted in some new patterns emerging from the jet stream.

In effect from her study, Ms. Francis says that the jet stream is slowing down, meaning that the loops of the jet stream become more erratic in their north - south pattern. A process which is making for some wild shifts in weather patterns, such as the recent record snowfalls of Alaska, Central and Eastern Canada and that of the Eastern US.

For the West coast she believes we will have more extended periods of rain in the winter months and for some pats of the coast, droughts in the summer.

Whether the North Coast will be subject to those swing in conditions is for the future to tell us, but for a place that already gets more of its fair share of rain than most places, a little bit of the drought thing in the summer might help cushion the anticipation of the monsoons of fall, winter and spring.

If you are particularly dedicated to the cause of environmental science, the entire report is available on line, free to those that belong to participating society memberships, available through institutions by way of a recommendation to a librarian or available for purchase for a 24 hour period through an online Library service

The Vancouver Sun has the Cole's Notes version of her speech to a recent conference in Vancouver.

A portion of her research has been posted on You Tube, where she provides a bit of overview of her work on the topic of Weather and Climate.

Email ThisBlogThis!Share to TwitterShare to FacebookShare to Pinterest
Labels: Weather changes may bring more wet to wet parts of the coast